Somewhere in my mid-to-late teens during the 1980s, I wrote-off Star Trek as an emblem of the archaic sci-fi that my dad grew up with three decades earlier: a mix of goofily imagined futurism and corny intellectual back-patting. Gene Roddenberry’s sci-fi was too “smart” to bother with its aesthetic presentation or indulge in the thrill of visceral experience. It was the kind of sci-fi that gave nerds a bad name. Although I had watched reruns of Star Trek: The Original Series almost daily during parts of my childhood, post-Star Wars, and with the 1980s in full blockbuster fertility, Star Trek seemed to lack vision and scope, and sensation. Until J.J. Abrams resuscitated the movie franchise in 2009, I don’t recall watching a full Star Trek movie or television episode on my own volition since, maybe, 1988. (I did take my Trek-obsessed younger brother to see one of the movies in the 1990s, but I couldn’t say which one with any certainty.)

Two of the three Star Trek movies that appear near the top of David Anderson’s chosen list of “Space Adventure Movies of the 1980s” are movies that I have seen before, but which have since been not only obscured by the passage of time but tainted by my aforementioned prejudice against Star Trek-style science fiction, so this seemed a worthwhile opportunity for me to revisit the movie franchise from the beginning with, hopefully, more generous eyes. As I recalled them from my childhood, Star Trek: The Motion Picture (1979) was a boring disaster that I may have never watched in its entirety; Star Trek II: The Wrath of Kahn (1982) was a fun adventure with some vividly sticky scenes; Star Trek III: The Search for Spock (1984) was abstract and confusing; and Star Trek IV: The Voyage Home (1986) was silly and a good excuse to stop watching anything Star Trek altogether. My recent revisiting of Star Trek: The Motion Picture (1979; reviewed on Letterboxd here), however, was a fun surprise, as I found myself delighted by its weird ambition and excess; contrary to my expectation, Star Trek II: The Wrath of Kahn (1982; reviewed on Letterboxd here), in its ordinariness, paled in comparison, but was still a decent evocation of the qualities of Star Trek: The Original Series.

All of that backstory brings me to the actual first entry in this Silver Screen Streak Movie Challenge list, Star Trek III: The Search for Spock (1984), which, again, confounded my expectations for this franchise.

The Search for Spock deals with the immediate aftermath of the events of The Wrath of Khan, which involved the activation of The Genesis Device — a technology that transforms uninhabitable environments into fertile biospheres, with the unfortunate downside of destroying all pre-existing life in the process — and the sacrifice of a beloved colleague. As the crew of the Enterprise defies orders to investigate the true fate of their titular Vulcan friend, they run afoul of a Klingon effort to claim the power of the Genesis Device for themselves. Along the way through this adventure, there are oddball highlights such as a visit to a swanky but disreputable alien nightclub, slithery and slimy creatures, a weird fast-growing kid, some genteel alien sex with unsettling age implications, and an incongruously decorative Vulcan ritual

Where I expected Star Trek III to prefer muddled philosophy over the straight-forward action of Khan, I actually found its action more engaging, featuring the movie franchise’s first serious use of Klingon antagonists (the leader vigorously played by the wonderful Christopher Lloyd). Meanwhile, the movie’s return to Genesis balances the action with just enough of the conceptual weirdness that made Star Trek: The Motion Picture such an intriguing effort. Even more so than its predecessors, however, this third chapter seems to be even more at home in The Original Series’ campy low-budget aesthetic. No longer even attempting to compete with the improved special effects of 1980s Hollywood science fiction, Star Trek III’s most expressive visual moments capably mine artistry from artificiality. It’s worth mentioning that The Search for Spock is the feature directorial debut of Leonard Nimoy, whose limited body of directorial work was never noted for its visual elegance. But Nimoy’s workmanlike blandness suits (or perhaps springs from) Star Trek’s TV legacy, and there are some neat creature effects and other moments that make the most out of stylizing those limitations in a fashion fondly evocative of their 1960s science fiction roots.

As Star Trek often feels like a permanent fixture faded into the background fabric of pop culture, it’s easy to forget just how good its actors are at doing what they’ve always done. Although Lloyd and a few other newcomers make notable appearances — like archetypal ‘80s movie jerk Scott McGinnis, or Square Pegs stand-out Merritt Butrick, or Jeffrey De Munn and Miguel Ferrer as Federation antagonists; future multiple-Emmy-winner John larroqueette, however, is unrecognizable — it’s the franchise cast who, seemingly effortlessly, make Star Trek work so smoothly and who satisfyingly sell the often hamfisted emotions. William Shatner gets to memorably act out both reserved and unleashed grief, but the real star of The Search for Spock is undersung Deforest Kelly, as medical officer Bones. Kelly not only gets to subtly channel Nimoy's Spock through a fun sort-of-possession angle but the strange contrast of Kelly’s age against Bones’ peculiar sassy fragility is mined effectively by both the actor and the script.

Star Trek III: The Search for Spock is not muddled or abstract; it’s fun and sometimes exciting with an essential mix of camp and curiosity at its core. Its campiness is both a comfort and a drawback for me, and for all of Star Trek’s reputation as thoughtful sci-fi, it’s a shallow broaching of atypical concepts more than a probing of provocative ideas. So far, I value these movies more as effective throwbacks to (or, in the first case, a ballsy attempt to transcend) an antiquated but culturally important TV landmark than as purely engaging standalone space adventures, but that seems good enough for now. 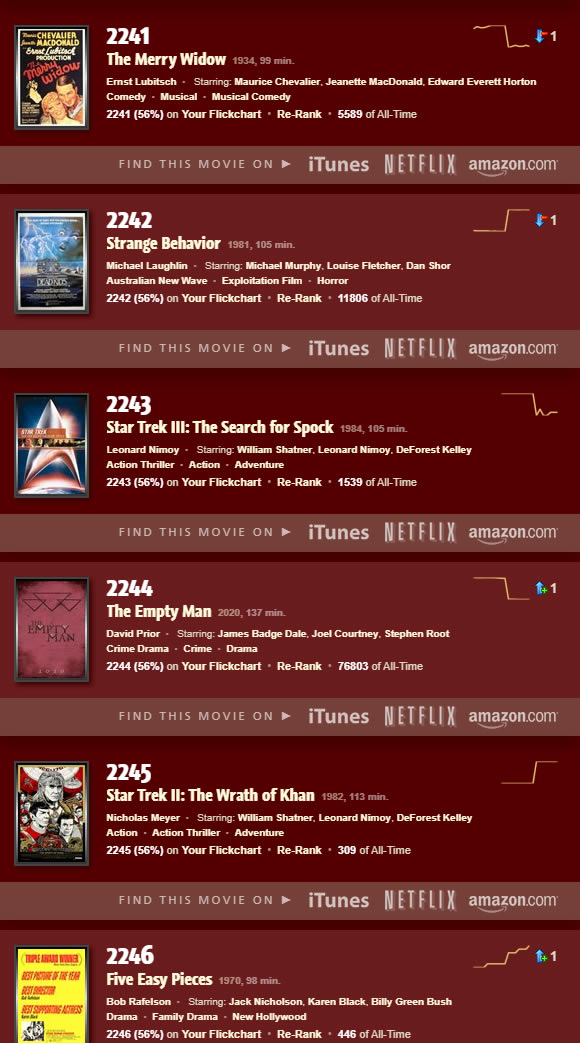 Star Trek III: The Search for Spock (1984) comes into my Flickchart at a respectable rank of #2242 (55.93%). The next movie from David Anderson’s list of Flickchart’s top-ranking "Space Adventure Movies of the 1980s." will be the next film in this franchise, Star Trek IV: The Voyage Home (1986), also directed by Leonard Nimoy. 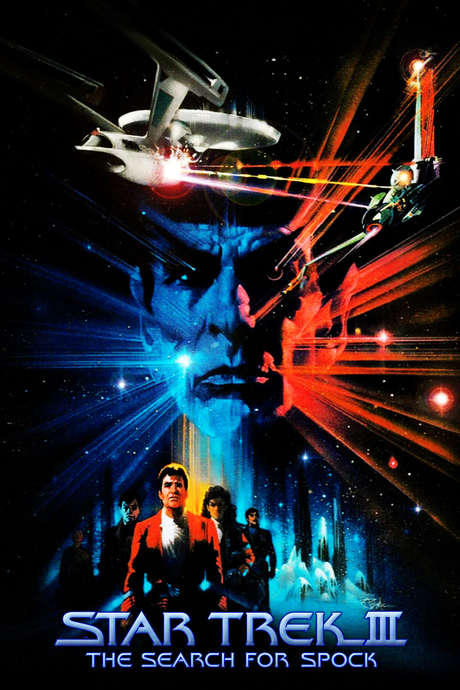 More about Star Trek III: The Search for Spock (1984) on Videopolis