Not being a fan of comics or the recent onslaught of superhero movies, the prospect of watching one of the "worst" of the genre fills me with both dread and bemusement. Having had to endure most of the entire Marvel Cinematic Universe with my son, I've had enough of the relentless parade of barely distinguishable origin stories and noisy apocalyptic battles; adding another two hours-plus of low-grade sameness sounds like torture. Then again, perhaps a movie that even fanboys discard as laughable will offer something new in its abject failure… but what if it doesn't? What if I can't tell the difference between Daredevil and, say, Captain Marvel? Or Thor: The Dark World?

Daredevil sort of tells the origin story of blind vigilante lawyer Matt Murdock (Ben Affleck), who hunts down the criminals he fails to convict, because he is a shitty attorney, who favors listening to heartbeats and making cryptic statements over providing evidence and making legal arguments. I say "sort of tells the origin story" because Daredevil doesn't tell much of anything beyond the broad strokes. My primary complaint with comics and the movies which sprang forth from their pages is that they often deal only in simplicity, resisting unpredictable characters, probing stories or traces of individual style. As expensive as they are to produce, they have reason to be risk-averse, but that also makes them artistically impotent even if they are diverting or well-constructed or surface-charming. Well, if most superhero movies already deal in broad strokes, the Daredevil "Director's Cut" is in its painful entirety like two or three extremely thick outlines drawn with one of those especially pungent permanent markers.

Take, for example, how Murdock acquires his powers. After a boyhood accident with biological waste leaves him blind, he instantly develops super-powered hearing, which he uses as a kind of sonar giving him acute situational awareness. He also, inexplicably, develops physical abilities on-par with Spider-man, able to leap enormous distances and jump off tall buildings with no consequence. Why? Who knows. He just has superpowers, because. And he's not the only one. Murdock falls in love with a billionaire's daughter (Jennifer Garner), who is also inexplicably an expert at wire-fu, soaring through the sky at will. Did she accidentally use some toxic lip gloss? In another instance of penurious screenwriting, a court case involving a wrongly accused defendant (rapper Coolio) is afforded ample screen time, including an evidentiary epiphany leading into the movie's climax… but it's never divulged what that evidence is or why it matters or how its jokey reveal leads to a "not guilty" verdict. In yet another failure to explore past the epidermis of its story or themes, Daredevil is loaded with religious imagery, but this only manifests in the text of the film when our hero wonders out loud if he's one of the good guys (while murdering a thug; Murdock also, as a defense lawyer, breaks into crime scenes, slathers them in his fingerprints, and physically assaults material witnesses). Sure, there's a church that figures prominently from frame one, and a priest who hangs around, but they are mere props; if you think it would be interesting to see a superhero wrestling with faith, this is not that movie. Even in small details, like how computer delete buttons work or what coroners might type in trade chatrooms, Daredevil seems lost somewhere between incurious and outright ignorant; there's no sense of authenticity to its world.

Another problem with Daredevil is how nakedly it wears its influences. It very badly wants to be a Batman movie: Murdock poses with gargoyles atop Gothic-style buildings; Murdock wishes to avenge the death of his father (in an alley following an event); Murdock relies on gadgetry built-in to his walking cane; Murdock's mask is adorned with pointy horns; being blind, Murdock even arguably out-bats Bruce Wayne. Daredevil also pays fealty to two popular action movies from the previous five years, The Matrix (1999) and Crouching Tiger, Hidden Dragon (2000), both of which feature fight choreography by Hong Kong master Yuen Woo-ping. Director Mark Steven Johnson (poorly) borrows visually from The Matrix's cyberpunk-y aesthetic, even going so far as to have villain Bullseye (Colin Farrell) raid Morpheus' wardrobe for the movie's climax. The Crouching Tiger influence is more pronounced, as it's felt in every Daredevil fight scene. When Murdock and Elektra fight-cute after first meeting, we get to see what a college acting class' version of wuxia might look like: lethargically paced and with two actors who can't stop beaming with pride at how clumsily they remembered every nonthreatening move. Ang Lee employed Yuen's wire work with grace and poetry, grounding it in a mystic thousand-year old martial arts discipline; transplanting that same technique to Daredevil just looks ludicrous, especially between a girl in hot jeans and platform shoes and a smirking blind man gleefully balancing on seesaws while school children gawk. And why are they even fighting in that scene? And how did they get these powers? And why did Roger Ebert give this three stars?

About these actors: I don't consider myself a Ben Affleck-hater, and he's certainly become a better actor as he's aged. He's always had a kind of vacant stare that has suited him well while playing bullies like in Dazed and Confused and been a hindrance in dramatic roles, like in Chasing Amy. One might think this would make him a natural as a blind character… It turns out, actual blind people have more going behind their eyes than does Affleck playing blind (albeit with enhanced sonar sight), and the combination of his tousled bowl-cut (does he cut his own hair?) and constant goddamned unearned smirk is nigh infuriating. He's just too proud of himself to play a brooding vigilante tortured by ethical dilemmas inherent to his vocation. Garner is very nice looking here, but I wouldn't call her a subtle or internal actress: she beams, she puzzles, she cries, it's all out there in the open. She has no mystery. What Marvel later learned about doing superhero movies well is that with a big bold subject, you need actors who can play against that, be small, do very little and crack-wise in a self-deprecating manner. That balances the fantastical elements and shifts them more believably into mundane world. Daredevil is all big all the time; director Johnson seems to think he's crafting a lush, romantic, soulful tone-poem — there's literally a 20-second long shot of a badly CGI-ed rose falling off a rooftop into a puddle — and it's just wrong for the material, wrong for the audience, and wrong for movies in general.

The Evanescence song "Bring Me to Life" features in Daredevil, and the movie's tone follows the song's lead. Maybe that's something people like. To be fair, Johnson's filmography looks like pure poison to me — writer of the Grumpy Old Men franchise, as well as the "Snow dad is better than no dad" classic Jack Frost; he cut his teeth directing Simon Birch and, later, Ghost Rider — and you can see where the clashing strains of Gothic cartooniness and precious sentimentality come from which split Daredevil in two opposite but equally obnoxious directions.

As a superhero movie, Daredevil is indeed noticeably worse than Marvel's later MCU output, but it's rarely bad in a fun or interesting way. It's bad in all the ways that I already find superhero movies wanting — a reshuffling of generic tropes, predictable paper-thin character types, an overall lack of risk-taking in story and style; no real ideas at work — but also completely lacking the surface of professionalism that would turn later comics movies into the phenomenon they are now. There are some little things that work, like the banter between Murdock and his law partner (Jon Favreau), which hints at future Marvel tone; and I kind of liked the recurring visual of Murdock using rain or spraying water as a visual aid, as at least it was something different. But overall it's a weepy slo-mo fest of overacting and false notes, hamstrung by a leaden self-serious voice-over, shoddy decade-out-of-date special effects and an overall lack of anything resembling humanity. 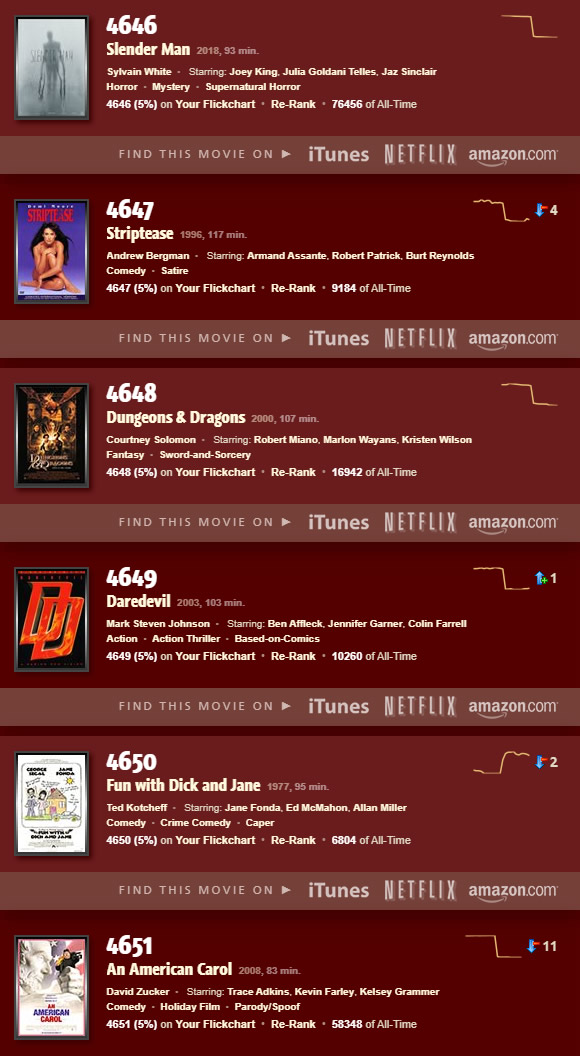 Surprise: Michael Reap's chosen list of terrible movies lobs up a real stinker! Daredevil edges out Gus Van Sant's Elephant for the worst movie yet in the Silver Screen Streak Movie Challenge, out of 38 so far, with a ranking on my Flickchart of #4649 (4.95%). This means that I can't continue with this How Did This Get Made? list at this time, but I will give it at least one more chance in the second round. Coming up, I'll look at Wayne Little's list of Australian Movies. 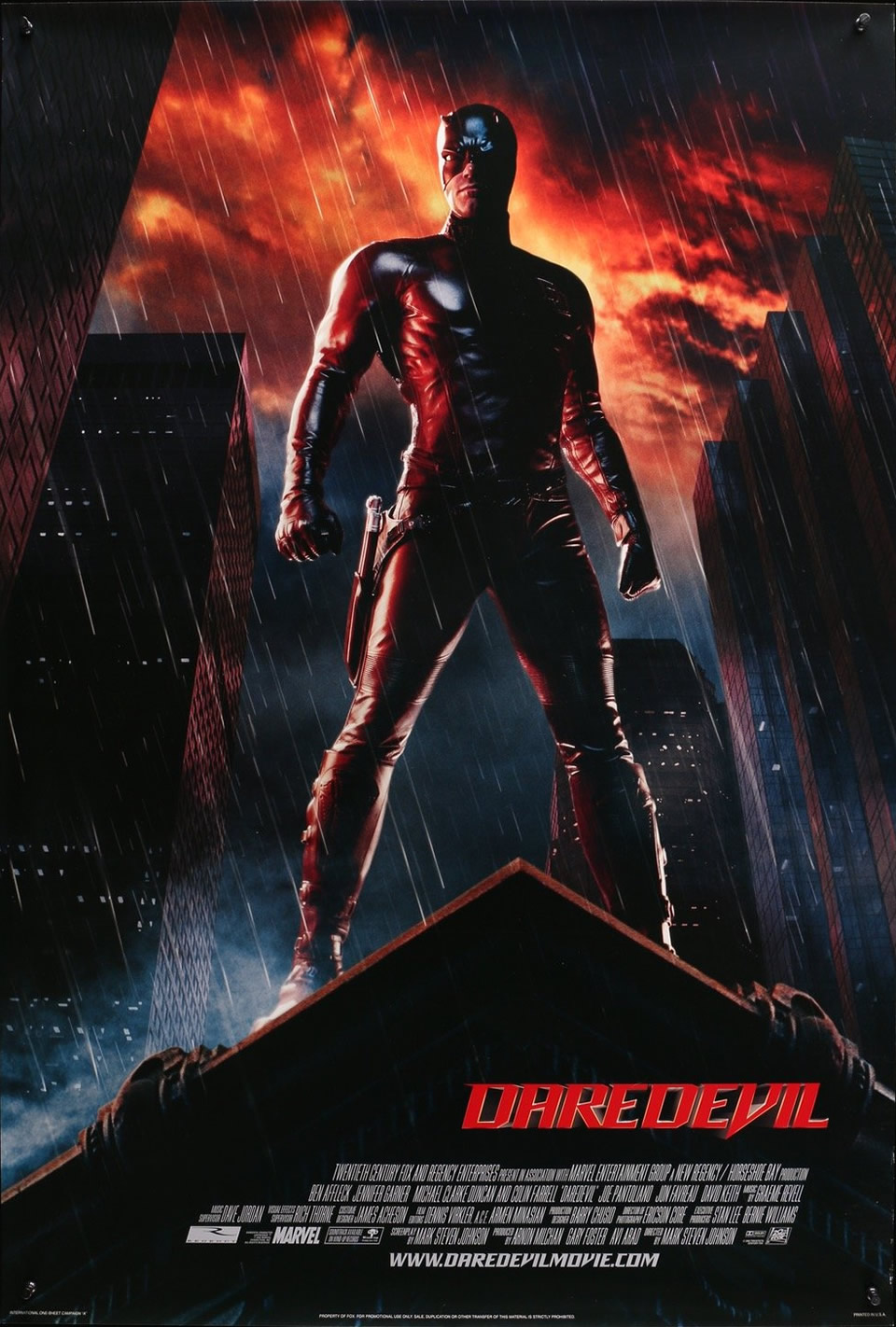 More about Daredevil (2003) on Videopolis