It's not very often that I bother to watch the movies covered by the How Did This Get Made podcast — I've seen about a quarter of them to-date, which seems like more than enough — and it's even less often that after listening to the show I'll make an effort to put one of its movies on my watchlist. The 1980 Menahem Golan rock musical The Apple is a rare exception. I am a somewhat sheepish fan of the Golan/Globus movie juggernaut, as the schlocky output of their studio Cannon Films was my lunch and dessert growing up throughout the 1980s. The 2014 documentary Electric Boogaloo: The Wild, Untold Story of Cannon Films recounts their fascinating, inspiring and ridiculous Hollywood careers with deserved affection and energy. Central to that story is the utter disaster of The Apple, which was Golan's first major effort toward making a splash in the U.S. film industry. As I also have a fondness for 1970s rock musicals (like Jesus Christ Superstar and Evita) and their stylistic imitators (like Jim Steinman and Styx) — and a lifelong crush on star Catherine Mary Stewart — the one-two punch of the documentary followed by the HDTGM episode on The Apple put it on my must-see list. It's fortunate that this dubious list of notoriously "bad" movies starts with one I've wanted to see for some time.

Say what you will about the quality of the idea behind The Apple, or the actual skill of the principle creatives assigned with pulling it off, it is a work of peculiar and 200%-committed vision. Golan reportedly considered it a "masterpiece" — there's a nice oral history of the movie here — and it shows. So, sure, maybe all of that ambition and passion was spent on something utterly vapid; but I'd far rather watch a bizarre, unique and absurd labor of love like this than a lot of generic, impersonal "better" movies. In fact, that very gulf between pure artistry and slick packaging just so happens to be exactly what The Apple is about.

On its surface, The Apple is A Star is Born re-envisioned as a dystopian disco Biblical allegory by way of The Rocky Horror Picture Show. Also on its surface (let's not pretend there's much going on beneath the surface here), it is an explosion of glittery excitement, a sensory overload of extravagance. While the songs (by Israeli pop star Coby Recht, Iris Recht and George S. Clinton) are forgettable (except for maybe the uncomfortably PG-rated orgy ballet "Coming Just for You") they're passable, and Golan stages them with no shortage of gusto. The first half-hour of The Apple is a virtual onslaught of dazzling disco camp, including a nightmarish detour into Hell which looks like it was conceived by a junior high school and staged by Broadway impresario Hal Prince. The whole movie tiptoes between B-movie chintziness and lavish spectacle, making it doubly impressive as an act of stubborn will.

Contemporary conspiracists can read their own messages into The Apple's blunt social commentary: Are Boogalow and his record company's army of shock troops the inevitable fascist result of rampant capitalism? Or is Boogalow's conformity-demanding retinue of gender-bending hangers-on evidence of the entertainment industry's aggressive destruction of virtue? Whatever the case, the damning irony of The Apple is that, while it supposes to tell the story of simple and pure emotion defeating the glamorous forces of cynicism, Golan is frankly terrible at creating authentic characters or relating genuine feelings, and only legitimately succeeds at producing the glorious overstimulating spectacles that are the bread and butter of his movie's villains. Stewart is charming (though she isn't given much to do, and looks weird with straight hair), but Gilmore is pretty bland; as heroes they are functional non-entities. Not much more can be said about Boogalow and his fiends, except that their costumes are weird and fantastic. The Apple is all about the big, shiny musical numbers and they are a beautiful stupid blast, full of lively choreography from future "American Idol" producers Nigel Lythgoe and Ken Warwick.

Is The Apple a "good movie?" Not by many metrics, including the ones I usually care about. It's not smart, it has no coherent ideas, and the characters aren't interesting (unless you take a step back and consider director Golan the central character of the movie). But it is a fun movie, a bold movie, with lots of leather and glitter and dancing nuns and weird animal-headed humanoids and neat bubble-topped baby carriages and a monorail and Joss Ackland as God appearing from a Rolls Royce in the sky… It's a wild swing for glory that misses the ball, and that's more interesting and more fun than movies that never swing at all.

Michael Reap's list of laughably weird movies from the How Did This Get Made? podcast gets off to an improbably good start, with The Apple (1980) debuting on my Flickchart with an incongruously respectable ranking of #1839 (62.38%). Sadly, this earns Michael's terrible list ONE FREE PASS to the second round, forcing me to watch an additional movie from the dregs of moviedom. Next up, something I really don't want to watch:  Daredevil (2003), a superhero flop directed by someone named Mark Steven Johnson, and starring Ben Affleck.

The Apple is now my 6th favorite movie from Cannon Films, out of 21 ranked on my Flickchart. 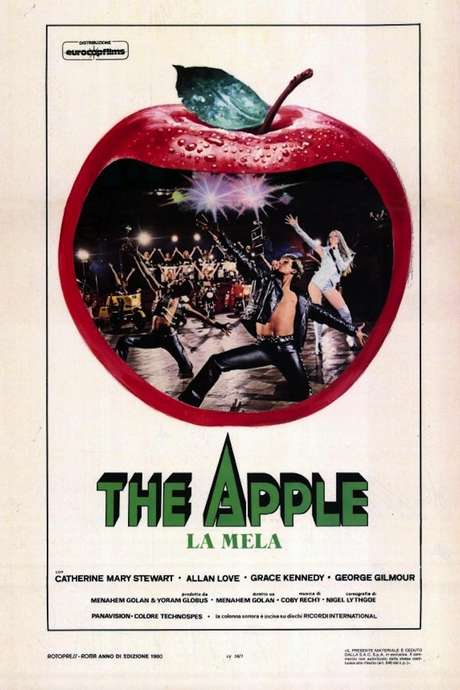 More about The Apple (1980) on Videopolis

Movies
PopGap
1980s
Menahem Golan
Silver Screen Streak
How Did This Get Made?
The Apple (1980)
Catherine Mary Stewart