When one considers the American New Wave — the decade from 1967 to 1977, during which nerdy film school students and counterculture drop-outs co-opted French New Wave cool and destroyed the old studio-driven ideals of mainstream Hollywood filmmaking — Scarecrow amounts to little more than a weird trivia question. Which American box office bomb starring actors fresh from blockbusters The French Connection and The Godfather won the Cannes Palme d'Or in 1973 (it was actually a tie, winning alongside another largely forgotten movie, Britain's The Hireling)? Beyond its casting and that remarkable victory, Scarecrow is an oddball addition to the New Hollywood canon, as its non-existent cultural impact is overshadowed by its muddled, counter-intuitive and downbeat narrative.

Al Pacino and Gene Hackman star as two lost souls who meet while hitchhiking east from California. Francis (Pacino) is a young sailor hoping to finally meet the child he left behind for a boat; Max (Hackman) is an ex-con who spent his time inside planning to open a car wash in Pennsylvania. They partner up for some rag-tag road misadventures, but nothing works out as planned.

As a showcase for two of the era's finest actors, Scarecrow is intriguing but unsatisfying. Pacino has rarely been goofier, a strange and not entirely welcome contrast sandwiched between two Godfather movies, and Hackman's usual affable mischief is smothered by Max's limited range of expression. Both actors, who naturally evince high intelligence, struggle to hide their thoughtfulness inside these blunt characters. The movie's more attention-grabbing performances come from lesser known supporting players Ann Wedgeworth, who was a TV utility player throughout the 1980s, and the always unsettling Richard Lynch (who gets a scene with future God Told Me To cohort Tony Lo Bianco).

What's most interesting about Scarecrow is how its sour narrative possibly reflects its late entry into the counterculture film movement. With giants like Easy Rider and Midnight Cowboy, both of which it uncomfortably echoes, having made their splash four years earlier, Scarecrow is well behind-the-curve in adapting the decades-long romance of the American open road to movie screens. In fact, by 1973, the allure of On the Road-style picaresque bohemian hobo journeys on the fringes had begun to fade, replaced by "Grindhouse" warnings about murderous hitchhikers, rural psychopaths and road rage.

I'm not sure any of that was on the minds of director Jerry Schatzberg or writer Garry Michael White. As a story about two hopeful misfits finding the opposite of renewal on their journey toward the most meagre of all American dreams, Scarecrow feels accidentally providential; but it's also sadder than that. Sure, the road may no longer offer the metaphorical promise it did only 5 years earlier, and those previous road movies also had a habit for bleak fatalistic endings (like Two-lane Blacktop, in which the film itself burns up right before the credit rolls), Scarecrow's two particular weary travelers were never likely to tap into anything positive, and it's hard to see their plights as anything other than self-inflicted.

On a character-level, Scarecrow is somewhere on the spectrum between severe social dysfunction and outright mental illness (despite its pattern-matching to earlier movies, in it can also be seen seeds of 1975's One Flew Over the Cuckoo's Nest). Francis is goofy and childlike, and a terrible judge of situations and people. Max may seem like a charming talker to the easily impressionable, but he's also aggressively self-centered and has a violent temper. Both men lack impulse control and foresight; they're really just fragile children who can't handle responsibility nor their inability to handle responsibility. Even though their itinerary is a straight line, they are stuck inside loops of self-defeat, and their partnership on anything seems like a sure-bet for a losing proposition.

Scarecrow is a story of two failed romances: the romance of the highway and the romance of the buddy movie, and both are stories of looking for love in all the wrong places. From the combination of gritty realism, upbeat folk-rag score, and a fine eye for stunning landscapes (tag-teaming from Vilmos Zsigmond and Schatzberg's experience as a top fashion and culture photographer), it's difficult to tell what exactly Scarecrow is trying to get across. Is it possible that a disillusioned Schatzberg took an intentionally negative view of the American counter culture in 1973 and that the Cannes jury knowingly awarded him for his perceptive cynicism? Or was Scarecrow simply embraced as one more beat in the march of hippie-era vagabond fashion?

In its trailer, Scarecrow is posed as a critique of American capitalist optimism, and according to this 2013 interview with White it's a personal story of redemption. It's only successful at either in the most facile manner, and I suspect that, just like its two characters, it got waylaid somewhere along the journey, overcome by its own quirks, and lost its sense of purpose. 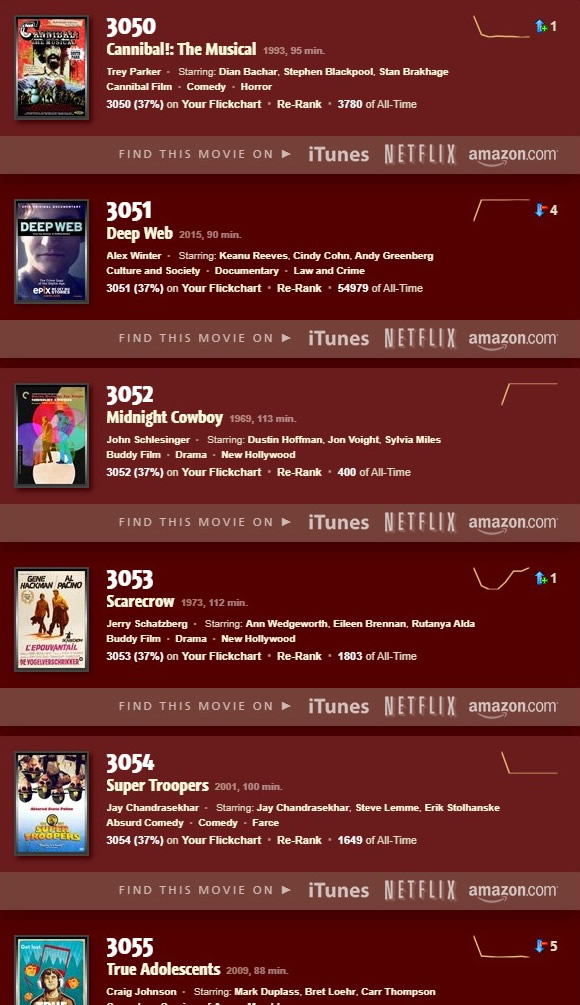 The third movie from Wade McCormick's list of Cannes Palm d'Or Winners, Scarecrow (1974) is a surprising road block. I loved this movie when I first saw it 30+ years ago; now, it rings false and confused, and only managed a measly rank of #3052 (37.14%) on my Flickchart. Therefore, my initial streak through this list comes to an end; but Wade has already earned a few FREE PASSES that will come into play in the second round. The next list comes from Flickchart founder Nathan Chase, the top ranked Mindbender Movies, a potentially treacherous minefield of nonsense for which I will soon post an overview. 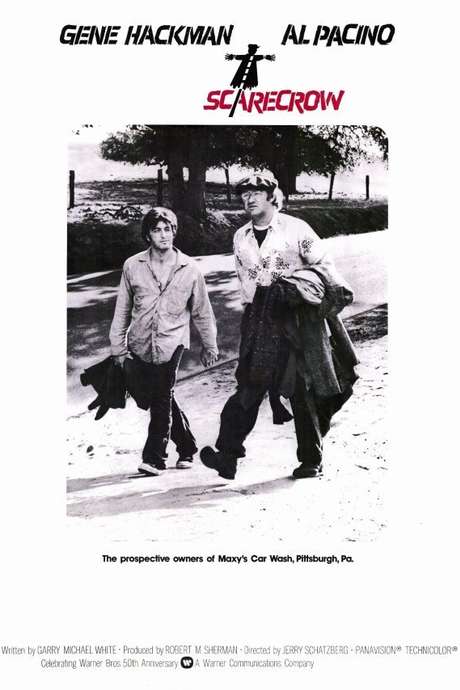 "The road leads itself to somewhere."
More about Scarecrow (1973) on Videopolis