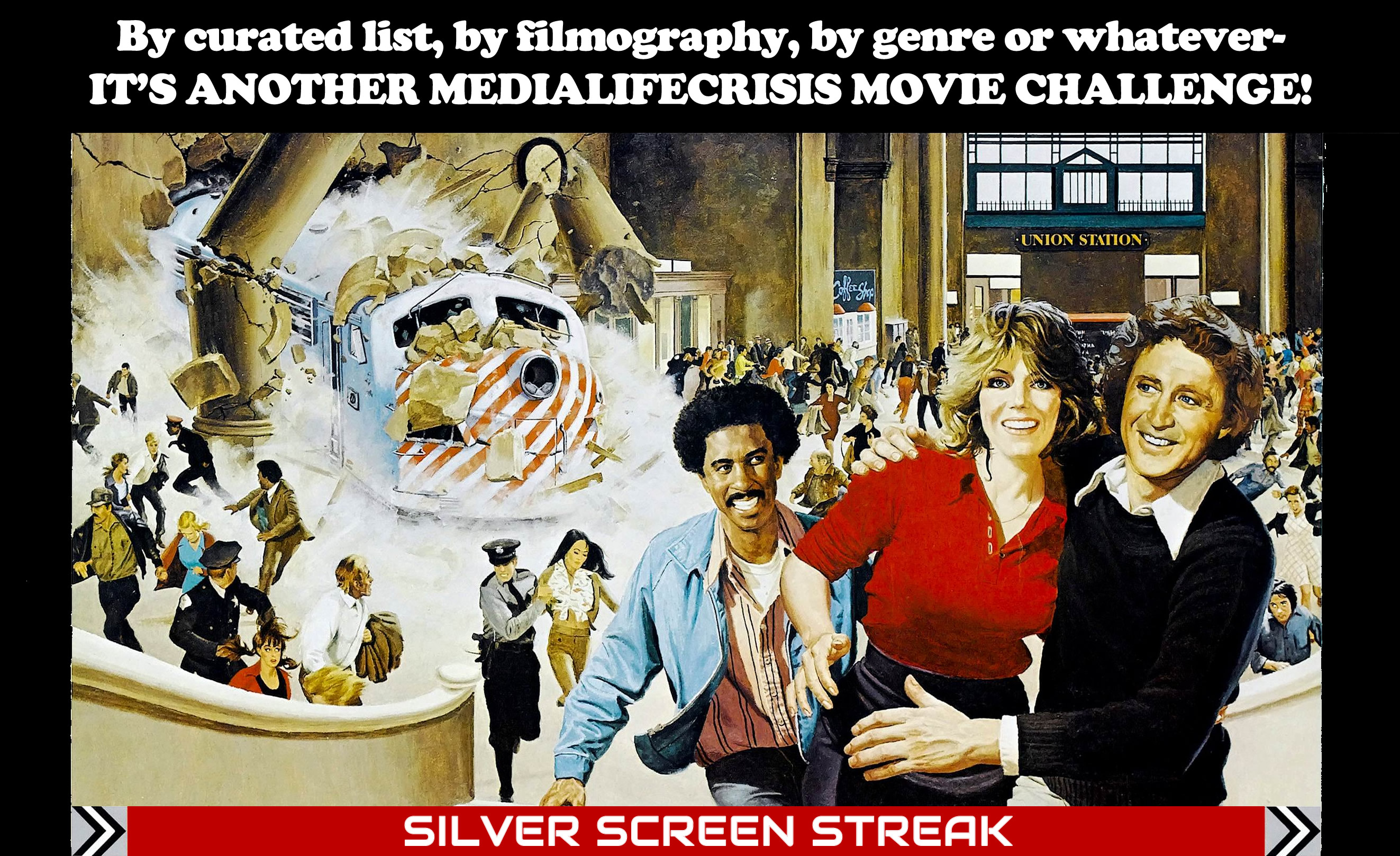 When I started my PopGap movie challenges in 2015, the format was simple: I would choose a list of acclaimed movies, usually from the website Flickchart, and watch the Top 20 I hadn't seen from each list. After that first year, during which I discovered the wider world of movie challenges and a community of movie fans hungry for the same variety, I've experimented with selecting movies from personal Flickcharts (in my Peer Review series), taking random selections from my Movie Slot Machine, hosting a year-long Potluck Film Fest stocked with handfuls of personally curated recommendations just for me, and, most recently, some director filmography deep dives in order tell Ron Howard to Eat My Dust.

Coming in February is my newest movie challenge project, which is a kind of evolution of those that preceded it: the Silver Screen Streak. Just like that first year of my challenges, I will be watching my top unseen movies from selected "best of" lists; however, this time I'm not the one picking the lists. That job has been outsourced. Some of my past Peer Review and Potluck Film Fest participants, as well as some newer members of the Flickchart community, have already submitted over 20 lists. This time, in fact, I will take lists from just about anyone, up until the end of January 2020.

You can either find a previously published list of movies or create your own custom list. I'll watch what I haven't seen from until I hit something I don't like, and then I'll move on to the next list.

Your list can be anything that has been published online or in print prior to January 2020. This includes both old-school editorial-style lists, like "TimeOut London's 100 Best Horror Films," and crowd-sourced lists like the kinds created on-the-fly at websites like Letterboxd, Flickchart, ICheckMovies, IMDb, etc.

Editorial lists are simple: I'll watch what I haven't seen from top to bottom — until I hit something bad that makes me bail.

Dynamic lists require a little more work. Let's say you want me to watch the filmography of Tatsuya Nakadai. Pick a site, like Flickchart or Letterboxd, and then pick a sorting mechanism like ranking, popularity, chronology, reverse chronology, whatever.

There are a lot of possibilities, not to mention Letterboxd's deep well of user-created lists.

A lot of those Editorial Lists, in fact, can be found on those dynamic crowd-sourced sites and sorted differently.

"TimeOut London's 100 Best Horror Films," for example, is on both Letterboxd and Flickchart. You could stick with the original editorial list order or use Flickchart's global rankings or Letterboxd's Popularity meter
to sort the same list according to different criteria and different user-bases.

As long as the list was created by someone else prior to the year 2020, it's fair game. Otherwise, it's a custom list.

“Hold on!” you say. “The fun of participating in someone else's movie challenge is hand-picking the movies for other people to watch. If I can’t do that, I’m not playing.”

If you think your personally curated list of movies is a better bet than a list published by a presumably authoritative source or the aggregated opinions of rando online movie fans, you can indeed make your own custom list. But there's a price to pay for your conceit, as you'll find out below in the section titled: "Try Running the Custom List Gauntlet."

So I say that will watch movies from your list until I hit one I don't like. That's not entirely accurate; here's the metric I will be using to determine whether or not I will go on with your list or nuke it and move on to the next one.

A little background: I rank every movie I watch on the website Flickchart, which keeps a fairly accurate and always handy list of every movie I remember ever watching in order, roughly, from best to worst. As of right now, I have 4696 movies on my Flickchart. Using this tool, I can easily tell you that my all-time favorite movie is The Godfather, Part II; and that my 4696th favorite (a.k.a. my least favorite) is The Number 23. To make those ranking numbers easier to understand without having to know how many movies on my chart, I often convert my rankings into percentiles, as follows: at 100% on my Flickchart is my favorite movie, The Godfather, Part II. At 0% is the worst movie, The Number 23. Using this same scoring method, my 100th favorite movie, Seven Samurai (1954) is at 97.87% on my Flickchart, while my 3305th favorite movie (Weekend at Bernie's (1989)) is at 29.59%. Right in the middle of my chart, at 50% (#2342), at this moment is the documentary End of the Century: The Story of the Ramones.

Back to the list challenge: In order for me to keep watching movies from your list, they must enter my Flickchart at a rank higher than 50.00%. Once a movie from your list loses the first match-up against the fulcrum movie in the gooey center of my chart, I will move on to another list.

Well, it's not quite that strict. There are a bunch of exceptions, to make this more interesting and game-like and complicated. Here they are:

Not complicated enough?
Try running the The Custom List Gauntlet

Movies from custom lists have a higher threshold: Movies from a custom lists must rank above 60.00% to keep me glued to the list. If I rank something lower than 60%, I'm out (SAVING THROWS still apply). There is no longer a FREE PASS for beating that 60% threshold, but you can still earn TWO PASSES for a movie that charts above 75%, and THREE PASSES if you land a movie above 90%; and if you get a movie in my Top 100 (97.88% or higher!), you'll get FIVE PASSES. Only FIVE PASSES total can be earned by any participant.

These are bit farther down.

What's in it for you

Because people like games, I will keep track of how many movies I watch from each list. I will also average of my rankings of the movies from each list. You can boast to your friends and neighbors about how I watched 17 movies from your list, twice that of anyone else. Or that your average ranking of 72% across 9 movies was the highest despite seven other people making longer runs. There are no cash or in-kind prizes. You are doing it just to do it, and because there is something wrong with you that make this kind of thing seem like fun.

What's in it for me

I get to watch the movies, and either delight or disappoint you with my reviews. No one is profiting materially from any of this.

How long will this last?

I'm not setting any time limits on this challenge. When I get done with one list, I'll move onto the next, and this will go on as long as it goes on, in my own sweet time. At the end, we’ll compare whose lists were most enduring, and whose watched movies ranked the highest, and who bombed out the quickest; and we’ll laugh at the losers while the winners feel smug about their insignificant accomplishments.

Pick a big list deep on quality and with some obscure movies on it. I've seen a lot of movies. If you were to pick, say, the AFI's "100 Years...100 Movies" list, that sounds like plenty, but I've already seen all of them, so it's really a dead end. The "They Shoot Pictures, Don't They" list, however, has almost 400 that I haven't seen, so there's a lot of room for exploration.

Realistically, it will probably be very rare that I get through more than 5 movies on any list, because I'm cranky and contrarian and dislike several things that make everyone else weak in the knees, but don't limit yourself. Maybe a miracle will happen and I'll get stuck on list for a couple of months.

Prepare for crossover. Other lists in this challenge might have some or many movies in common with your list, making the "sure thing" you thought you had at the top of your list no longer in play by the time I get to your turn.

The dynamic ranking and rating of lists on Flickchart and Letterboxd can make them unpredictable. The movie that's at the top of these sites' "Best Movies of 2018" lists today might be replaced by something else next week as more people contribute to the calculations.

The best way to get an idea of what movies I haven't seen is to check my Flickchart. Here is Flickchart's register of movies that I haven't ranked yet.

No Short films, Mini-series and Special Subjects. I typically skip these when they show up on dynamic Flickchart or Letterboxd lists. Same goes for performances like filmed live plays and music concerts and comedy specials. I will assume that I am skipping these if they show up on any list, unless you tell me otherwise. I am not very interested in these things — I rarely rank them on my Flickchart — so making me watch them will hurt your list's chances for a long run.

What about documentaries? I will let you decide whether you want me to watch individual documentaries that show up on your list. I love a lot of documentaries, but a lot of them aren't cinematically interesting.

The SILVER SCREEN STREAK movie challenge will begin in February 2020

You can let me have it on the Facebook page: https://www.facebook.com/medialifecrisis