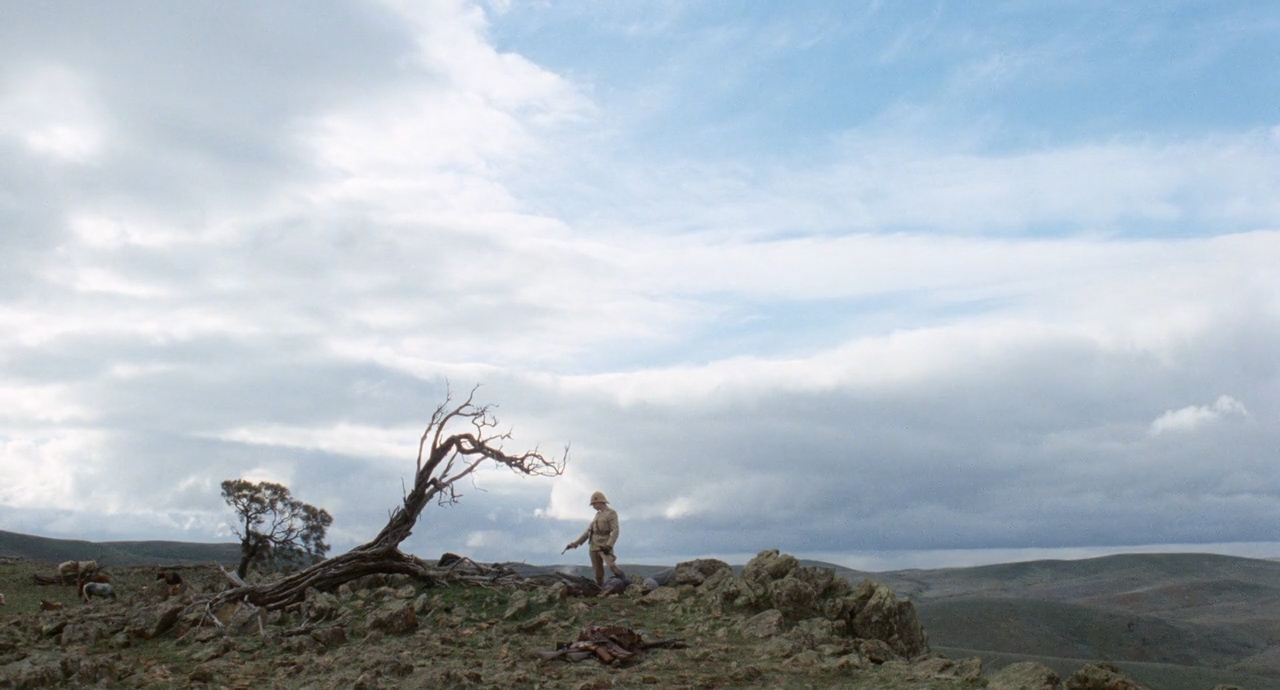 The gentlemen's war is over.

I rarely get excited about war films or courtroom dramas; each of these genres seems to recycle a stock set of themes and arguments — in addition to some of the more superficial tropes often used to explore those ideas — so that, even when one is extremely thoughtful and well-made, my appreciation stops at the line separating the movies that impress me with their skill and those that thrill me in a more profound way. the Australian military malfeasance drama Breaker Morant is an example of one such movie that boasts superlative execution, well-explored issues, and stirring performances, and yet remains confined within the traditional limits of my expectations for its format.

Breaker Morant is based on the true story of three Australian officers (Edward Woodward, Bryan Brown and Lewis Fitz-Gerald) serving in the Anglo-Boer wars in early 1900s South Africa who are court-martialed for retaliatory actions taken after their fort's Captain was brutalized by an insurgent ambush. For political reasons, the British Army wants an expedient guilty verdict, and is tipping the scales of justice in favor of that conclusion. However, the Major (Jack Thompson) assigned to provide a token defense for the Australians presents, instead, powerful arguments in their favor.

Directed by Bruce Beresford, Breaker Morant does an excellent job of laying out the many ways in which warfare presents an intractable moral quandary for which there are no satisfying solutions; as always, the human price paid as the inevitable outcome of those unsolvable problems is exacted from the soldiers in the field, who do not possess the power to deny the immediate facts and delegate responsibility. Beresford and screenwriters Jonathan Hardy and David Stevens (adapting the play by Kenneth G. Ross) tackle this ethical morass directly, but elegantly; rather than taking a strident anti-war stance, Breaker Morant acknowledges the contradictions that plague conscient societies who engage in war, an act that fundamentally defies conscience: the rules imposed on war, to make it palatable, are not only unenforceable in a practical sense, but soldiers are expected to obey, ignore and suffer from these rules according to shifting perspectives and interpretations that rarely reach them until after the fact. With its more measured tone, Breaker Morant is superior in some ways to Stanley Kubrick's Paths of Glory, which broaches similar issues with grander spectacle, including a crudely cartoonish villain who cheapens that movie's ultimate effect. Breaker Morant also concerns the disposability of low-ranking soldiers, but in a far less sensational, coldly administrative manner. Beresford's movie also offers another look at the common war movie theme of how combat changes, and is then changed by, the men who fight it, in a devolving feedback loop of frustration and despair.

Although Breaker Morant lacks the visual flair and creative energy of Paths of Glory, Beresford uses his typical understated approach to marvelous effect. For a movie that consists mostly of arguments in small, drab spaces, versatile cinematographer Donald McAlpine (whose other credits include Predator and Moulin Rouge!) is able to keep the courtroom scenes from feeling dry or monotonous with a variety of inconspicuously dynamic angles. In these scenes, naturally, the actors shoulder a majority of the work, and Woodward and Thompson are experts at doing a lot with very little, building character through their shifts in (or lack of) reaction, and where the slightest wince, glance or curve of the mouth communicates everything. When given the chance to work in open spaces, McAlpine wisely maintains a conservative approach for cohesion, but his exterior framing beautifully contrasts the small people with their environments, suggesting the lonely manner in which they make their choices, fight their enemies, and die.

Due to its combination of war and a courtroom, I don't know if I'm capable of loving Breaker Morant in the way that I do many lesser-made movies about far dumber subject matter, but it's great enough at what it does to make that disparity nag at me a little.

Breaker Morant was brought to my Potluck Film Fest by Flickcharter David Conrad, who can be found on Flickchart under the username DavidConrad. He ranks it on his chart at #80 / 1650 (95%), making it his favorite movie out of the three he's seen that have won the Australian Best Picture Award. Breaker Morant ranked on my Flickchart at #781 (80%), putting it at #4 on my chart of Australian Best Picture Winners.

I think of #BruceBeresford as a dry, ordinary director but #BreakerMorant is elegant & thoughtful w/o a spoiling agenda. #PotLuckFilmFest https://t.co/CTQrlOIfl7 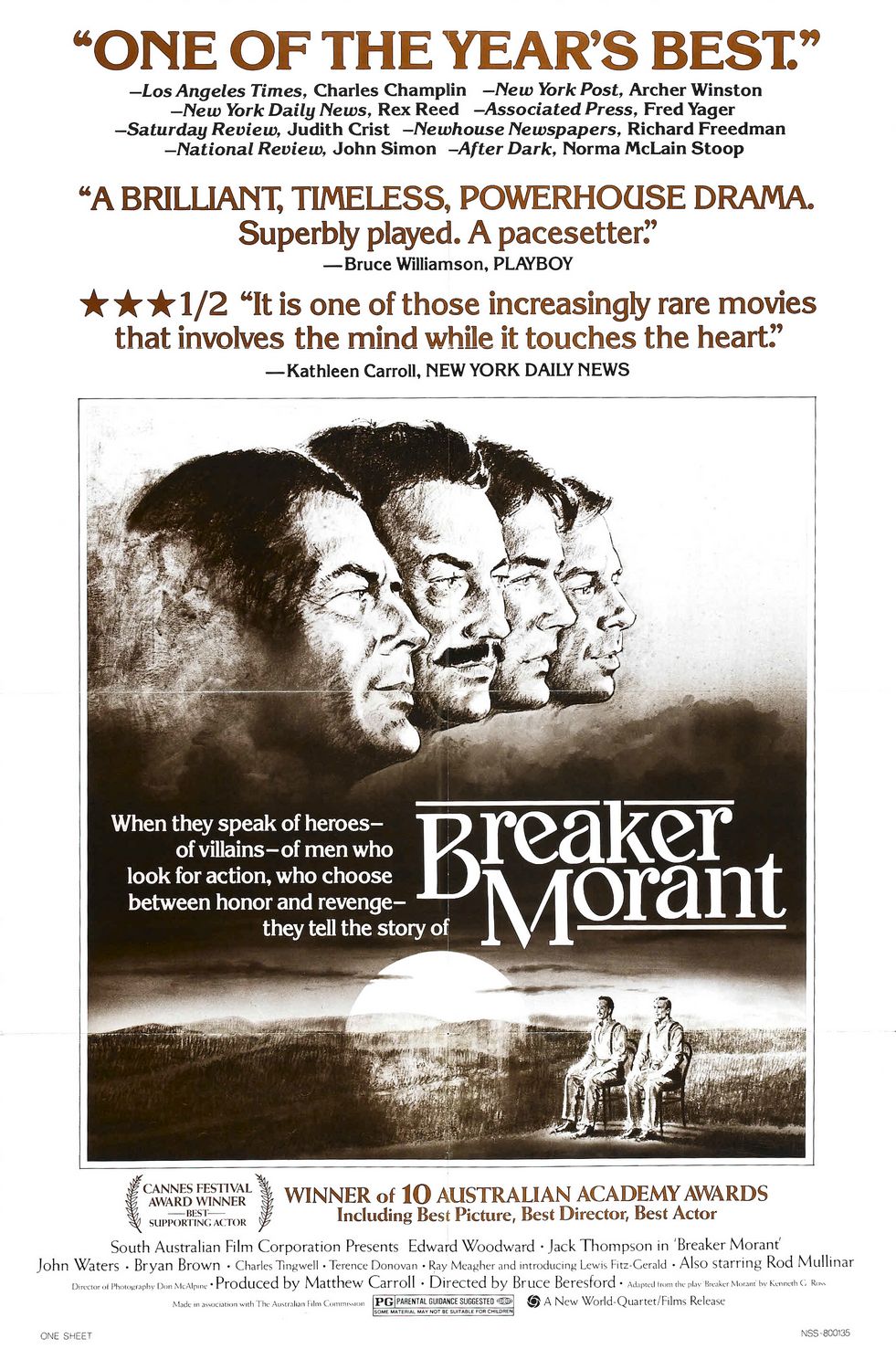