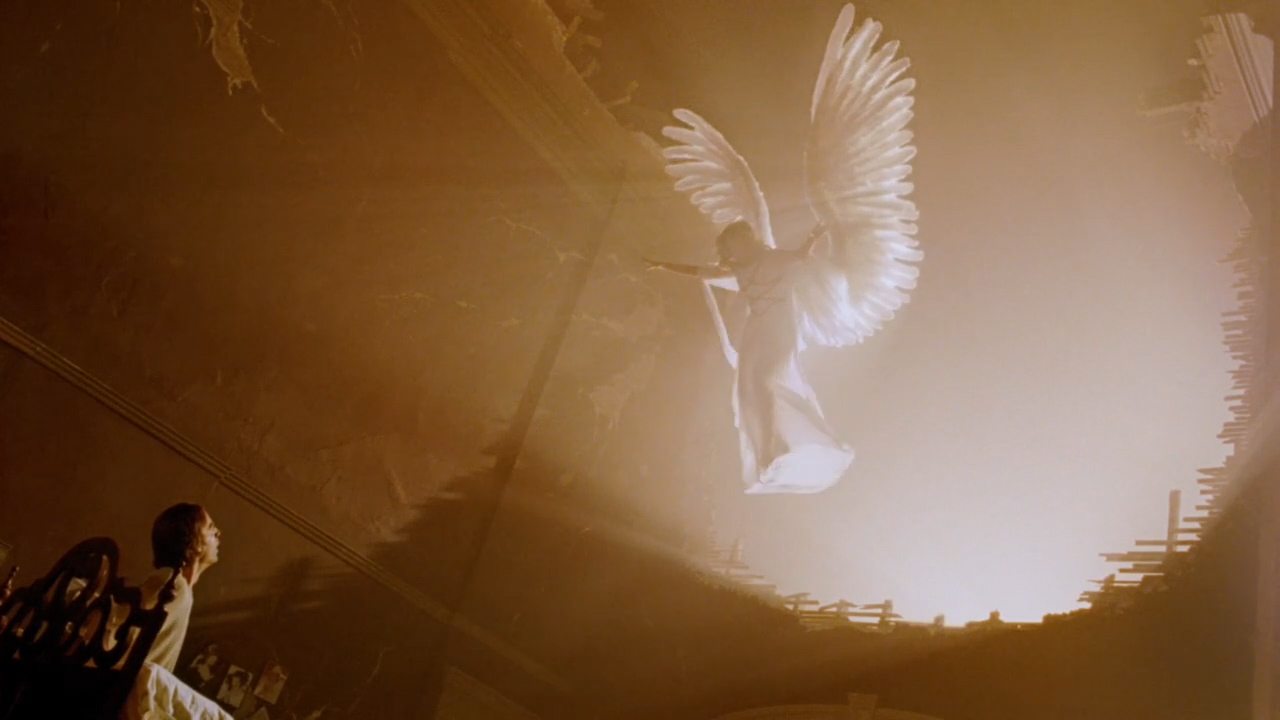 You're old enough to understand your father didn't love you without being ridiculous about it.

I knew I was in trouble when I elected to accept the six-hour HBO miniseries Angels in America into the inaugural month of the Potluck Film Fest. I not only object to strident moral and political messaging in movies — even and often especially when I agree with them — but I also tend to have reactionary fits when confronted with movies that are considered critic-proof, as if the social importance of the subject or message of a work of art is paramount above the qualities of craft. Director Mike Nichols' 2003 adaptation of Angels in America, from Tony Kushner's 1993 Pulitzer- and Tony-winning play, tripped just about every warning wire in my Content Emergency System, but also hinted at just enough substance underneath its grandstanding to make me wish there were more of the prosaic narrative that had been buried by all of the bombast.

Angels in America tells four overlapping stories that occur at the dawn of the AIDS crisis in mid-1980s New York City: a man struggles to support his lover, who has been diagnosed with the emerging virus; a Mormon's refusal to accept his homosexuality drives his wife to pill-induced delusions; conservative cutthroat lawyer Roy Cohn also falls ill despite his attempts to litigate and bully away the irrefutable facts of his biology and sexuality; and then there's the fantasy elements: angels and ghosts visit the dying, either to enlist them in a metaphysic campaign or rebuke them with the emptiness of their lives. While I would have welcomed a realistic and nuanced movie-length exploration of any one of the three human-based stories, it's the glam "fantasia" that usurps them all with its incoherent mix of anti-religious theology and angry progressive politics.

I shouldn't expect a movie to be something it's not, but the only moments in Angels in America during which I found myself responding to the story or characters were the quiet ones, such as early in the second episode after the attention-grabbing introductions were behind it, or late in the fifth episode when everyone was too sick and/or worn out to overact. In this adaptation from the stage, Nichols has left too much stage on the screen, directing his actors to try and match grand events with even grander facial expressions, or climax scenes with flurries of yelling when cinematic restraint in counterpoint might have worked more powerfully. I actually felt myself longing for the prosaic kitchen sink mawkishness of Longtime Companion.

There's no doubting that Angels in America was important to both the Broadway and larger gay communities as an epic summation of the terrible toll that AIDS took from them, and their survival from the early worst of it, but the project is nevertheless provincial despite the size of its canvas. By no means the first serious drama to touch the subject, it was the biggest and loudest — and, perhaps, the most operatically political, anti-religious and self-congratulatory. Maybe if I had seen myself as an embattled soldier in a binary culture war against an "evil" conglomerate of pestilence and bigotry, Angels in America would seem to me like a brilliant, caustically defiant and deeply meaningful catharsis and testament. Heterosexual and areligious, however, with no stake in the vitriol, I found it noisy and needy, and all together too arch: carefully laying down the tracks for human-like but obstinately stereotypical characters with no integrity to be mashed up and fed into Kushner's climactic rage, fulfilling the author's expected ulterior motives following hours and hours of cynically feigned drama. One of the final, and most off-putting, images of Angels in America is one of the main characters literally looking down on the audience for several minutes as he smugly lectures them, his only claim of authority derived from his victimhood. Perhaps the most potent message to be gleaned from Angels in America, albeit inadvertantly, is that a too-narrow focus on politics poisons a person's humanity, their personal relationships, and their artistic expression.

The cast of Angels in America is impressive on paper, but the results are wildly mixed. While there are no wholly bad performances, the use of Meryl Streep and Emma Thompson in multiple roles results in a few successes but more gimmicky failures. Streep gives one of the miniseries' best performances as a concerned Mormon mother, but she has the benefit of playing one of the more generously written and least hysterical characters. Thompson makes a striking angel even though she is saddled with the script's most nonsensical dialog. Al Pacino gives 200% as Cohn, and has several of the series' brightest moments, but under Nichols' "more is too little" direction Cohn becomes virtually indistinguishable from Pacino's villain role as Big Boy Caprice in Dick Tracy. Patrick Wilson and Mary-Louise Parker (who should give top-dollar classes in eye-rolling) desperately want to break out of Kushner's deceptively limiting purpose for their broken Mormon family, but, at their best, are merely allowed to be appealingly innocent. If anything, both are better than their roles, showing too much humanity and intelligence to justify the odd forks their paths take. Ben Shenkman and Justin Kirk, as the couple at the locus of the story, are very good when given time to breathe, but lack the star personalities to compensate for iffier moments. Jeffrey Wright, who was still relatively unknown in 2003, gives the most consistently assured performance throughout his four roles over six hours, smartly playing the truths beneath his sometimes campy costumes, and outmatching Pacino in their intimate scenes together. If his lead role in the 1996 Basquiat wasn't convincing enough, Wright's ability to stand-out from this heavyweight cast, in spite of uninspired direction, and while largely sharing the screen with an amped up Pacino, is remarkable. the entire six hours is worth enduring for his performance alone.

Angels in America was brought to my Potluck Film Fest by Hannah Keefer, who can be found on Flickchart and Letterboxd under the username purplecow17. Angels in America is Hannah's favorite Mike Nichols movie, out of nine, ranking at #61 out of the 2558 movies on her Flickchart (98%). It's been added to my Flickchart at #2240 (39%), and it sits now right at the fulcrum of my Mike Nichols chart, #6 out of 11. 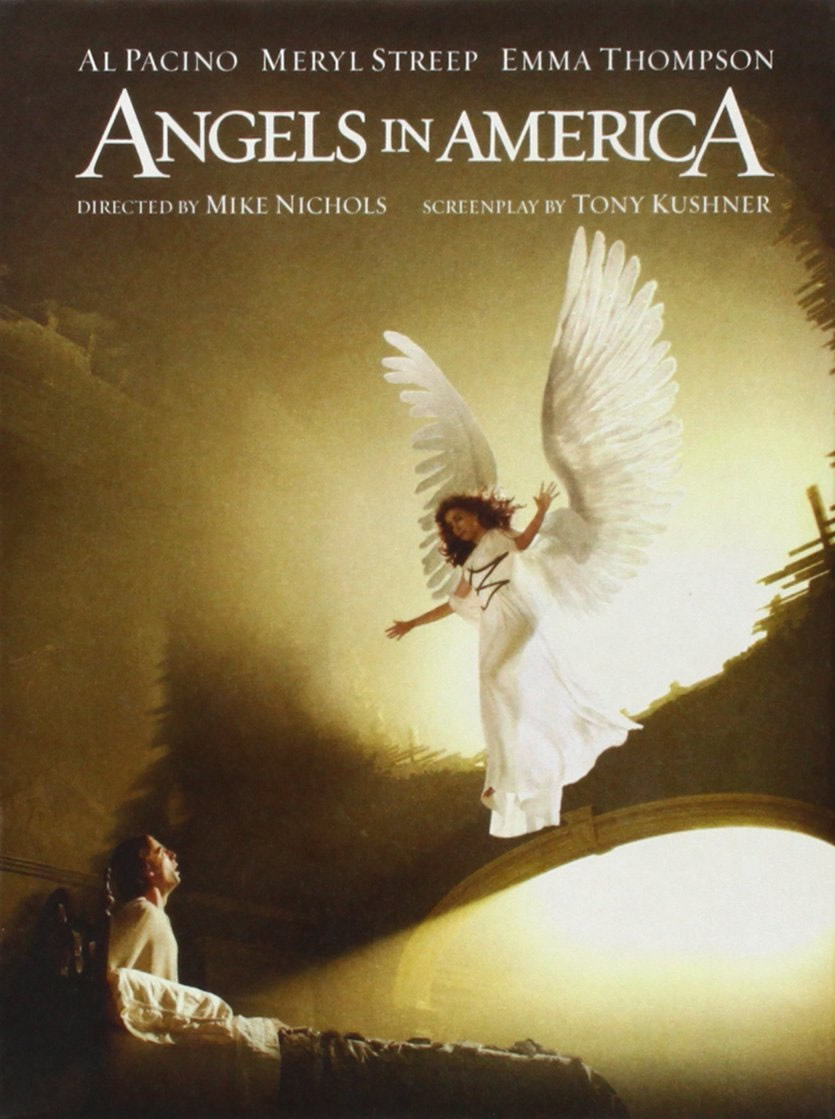