Your humor is not funny.

The 2008 monster movie Cloverfield didn't make much of an impression on me — good cast + well done but tiresome "found footage" gimmick, but I forgot about it almost immediately after watching it — so it was something of a surprise to me when a giddy buzz of enthusiasm greeted news that Cloverfield's producer J.J. Abrams' had secretly shepherded through a sort-of-semi-sequel. Even more surprising were the rave reviews that movie, 10 Cloverfield Lane, received upon its release earlier this year. I suspected that it was all just another case of self-feeding Internet wish fulfillment, especially when I heard about the movie's dubious backstory: that Abrams plucked an independently written, unrelated screenplay and shoehorned it into a haphazardly shared cinematic universe. However, 10 Cloverfield Lane really is that good — near perfect, in fact; at least, except for the spectre of its "franchise" that knowingly deflates the script's finely tuned mystery and the awkwardly ordinary ending required to satisfy its namesake.

Mary Elizabeth Winstead stars as Michelle, a young woman fleeing the city in the wake of a sour break-up. She doesn't get far on her own: her car is run off the road, and she wakes up days later, injured and chained to a wall in an underground bunker. Her gruff captor, Howard (John Goodman), insists that he's saved her life in the midst of a cataclysmic — but suspiciously vague — attack that has poisoned the air outside, requiring that the two of them, and another occupant (John Gallagher, Jr.), stay locked up together for at least a year.

For 85% of its briskly paced 103-minute running time, 10 Cloverfield Lane is a marvel of tight-but-minimalist screenwriting, dead-on editing, and compellingly intimate acting. When Goodman gets Oscar attention next year for his richly pleasing performance, it will surprise no one: he's a beloved actor of a certain age revelling in a meaty role that is both funny and terrifying, and he nails it. However, Winstead is even better in her less-showy and more difficult role, as the steady thrum of tension that makes 10 Cloverfield Lane so riveting is largely derived from the story told throughout by her eyes. Like a hyper-intelligent but emotionally wrought Kit-Cat clock, Winstead fills in pages of subtext with her many wary looks askance, stolen glances, eye-rolls of forlorn disbelief, and her silently determined adjustments to new information. It's a tour-de-force of eye work. As the third-piece in this intimate set, Gallagher provides an affable foil to the contest of wills between Winstead and Goodman, but lest his performance be underrated, it's worth comparing his simple and likable Emmett to Gallagher's other eye-catching role of 2016, in the similarly confined Netflix horror thriller Hush — he's a compelling actor with many levels, and Emmett is another finely calibrated cog in this almost exquisite suspense machine.

10 Cloverfield Lane's one big problem is that it feels like two different movies. For the most part, the knowledge that it belongs to a monster invasion-themed franchise degrades the artfulness of Trachtenberg's skill at constantly pulling the rug out from under Michelle's quick resolve. Winstead is so effective at empathetically playing her revolving realities that it still works, but I watched the movie with someone who had never heard of Cloverfield before and she seemed to experience Michelle's trials more intensely, because the mysteries were actually mysterious. the bigger drawback to this uneasy movie marriage is that, to earn its family name, 10 Cloverfield Lane ends like every other high concept blockbuster released these days: with a flurry of cartoonish CGI effects and credibility straining action. Although there's nothing wrong with these elements in and of themselves, their prosaic familiarity feels far below that standard set by the better parts of the movie. Finally, there is the lingering awkward question of why this shared universe was contrived to begin with if they weren't even going to bother with any recognizable elements of crossover aside from that word in the title. Maybe there's some master plan at work, to be satisfyingly paid off in a future film, but until then the dispiriting spoiler-by-association issue seems to be little more than an act of marketing. With no real substance behind it, the "Cloverfield" brand has unfortunately degraded what is otherwise a first-rate thriller with some of the best acting of the year so far. 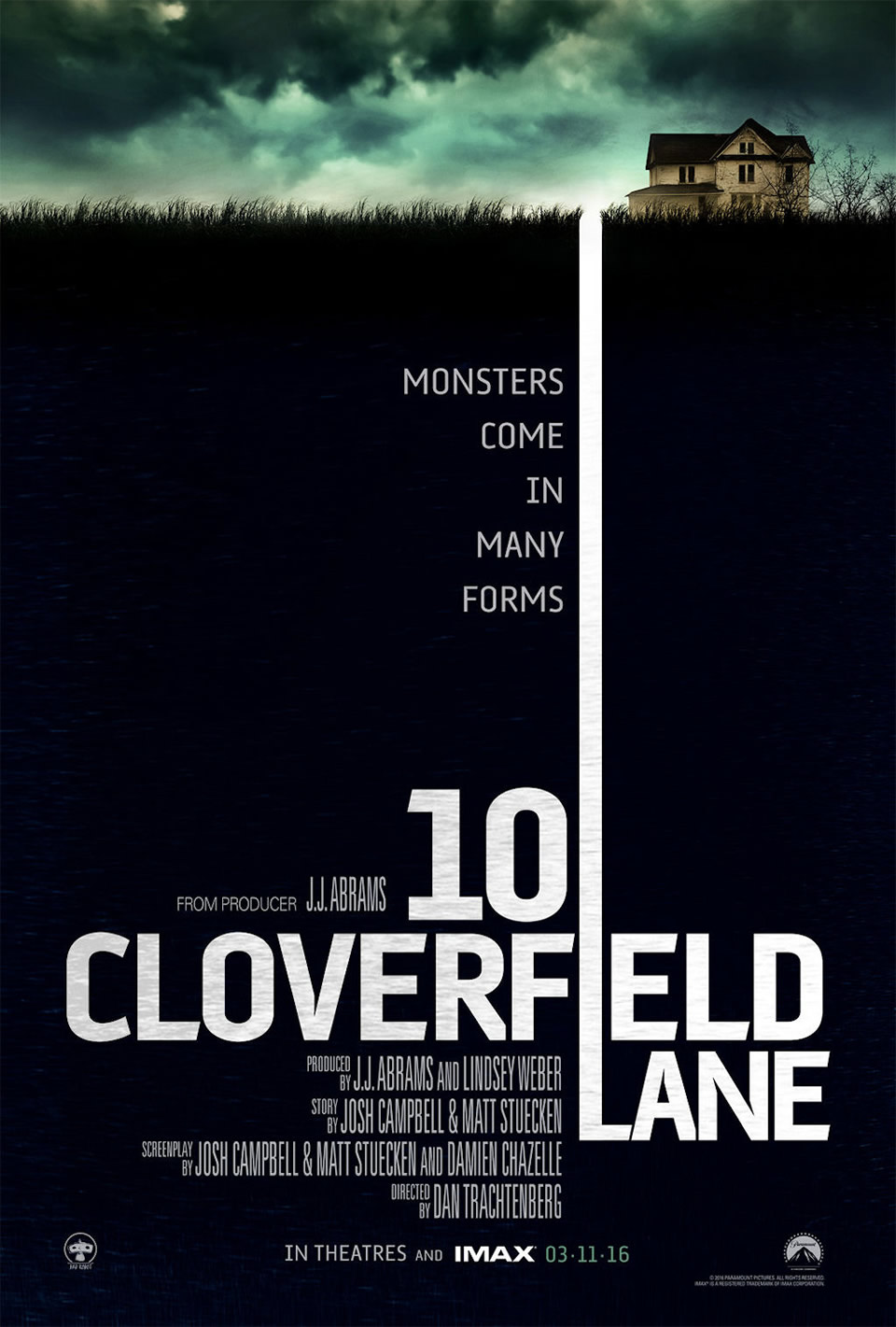