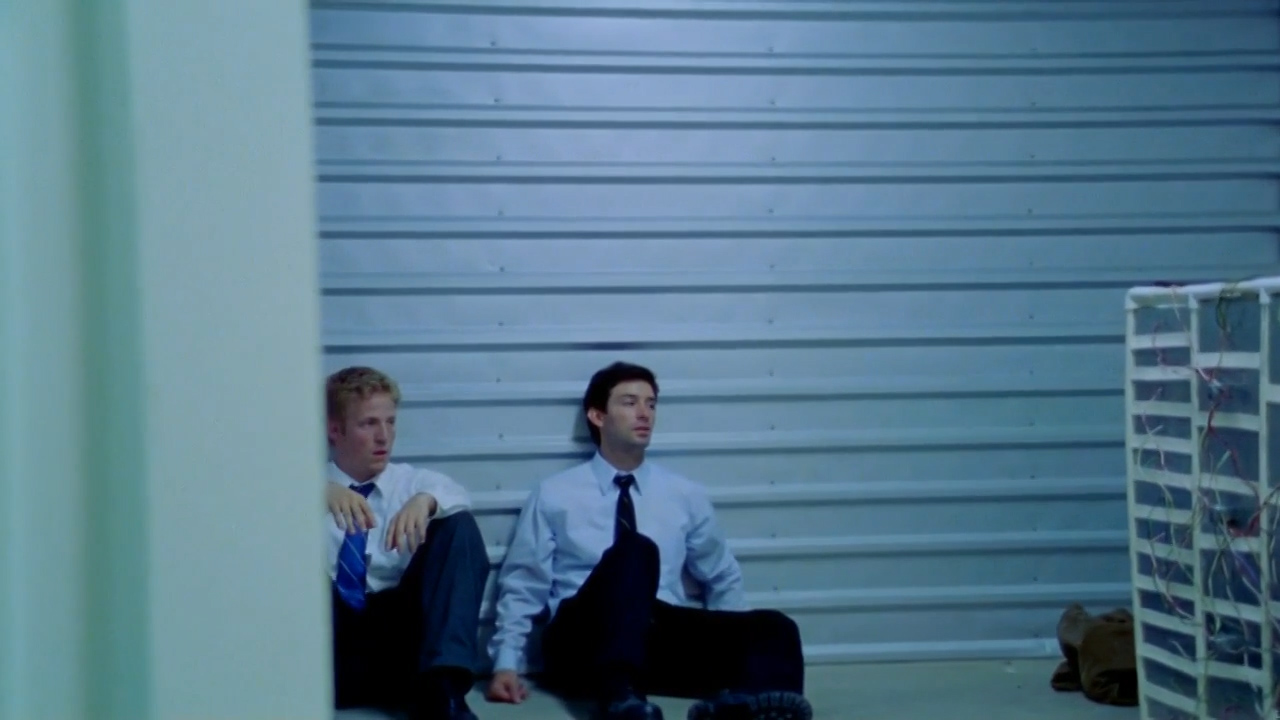 Over at Letterboxd, the reviews of Shane Carruth's 2004 time-travel drama Primer are split mostly into two camps: those who think it is simply brilliant, and those who give it an above-average star-rating despite claiming that they didn't understand it. the latter group displays a fascinating phenomenon, giving a movie credit for a presumed quality over the actual experience of watching it, and assuming that its failure to communicate with them is a sign of their own inferiority. Certainly, Primer is admirable in several respects, primarily its densely layered concept and secondarily its shockingly low budget. However, I found those two qualities at constant odds, and not in a positive way. Carruth's cleverness in developing twisty timelines was undermined by his lack of cleverness in overcoming with his budgetary limitations, leaving Primer dull, dreary and confusing in all the wrong ways.

Two aspiring entrepreneurial inventors, Abe (David Sullivan) and Aaron (Carruth), inadvertently create a time machine and face the usual complicated tangle of paradoxes as they attempt to exploit its possibilities. As expected, the two partners deviate from their established rules, creating cracks in the continuum that split into conflicting timelines and create looping ripples that threaten the synchronicity of established events.

Time-travel movies have it tougher than most other sci-fi subgenres, as they require more diligence than usual to establish narrative credibility. Primer is, with only a few nagging minor questions, a model of narrative planning (as can be seen in these fan attempts to chart its complicated plot). All time-travel movies are essentially the same regarding their basic ideas, however, and what really distinguishes the best of them is how they integrate technical inventiveness into an engaging story with empathetic characters whose conflicts within the chaos are meaningfully felt and understood, and this is where Primer fails.

At only 77 minutes long, Primer feels too slow during its first third, which dwells on decent mumblecore filler, and too fast during its last, which condenses too many complications and revelations into a murky blur. Carruth supposedly wanted his film to reflect the confusion felt by his characters, but his obfuscating technique — providing no establishing visual cues or identifiable quirks to indicate timelines or iterations of characters — is a cheat that further distances the viewer from Abe's and Aaron's experiences. Not all confusions are equal, and distracting the viewer with formal difficulties is a poor substitute for the tougher challenge of drawing us deeper into the tension created by the inevitable paradoxes. Sadly the reported $7,000 budget may have been a key obstacle, precluding the use of special effects to more clearly present the idea of character doubles or professional actors capable of expressing the complexity of the situation through their performances. Both Sullivan and Carruth are adequate actors during the first half, but as the situation goes haywire, their performances remain static, even though they are tasked with playing up to four different versions of Abe and Aaron.

Aside from the intricate looping of the timelines, other aspects of Carruth's storytelling are severely lacking. One sequence involves another person commandeering one of the time machines, but so little effort is spent introducing this character outside of a brief moment of monotone narration, and the visual style of the film is so oblique (the main motif seems to be framing out the tops of heads), that what should be crucial, shocking appearances are instead indecipherably vague and flat, and stall rather than increase the momentum of the movie. the same visual issue also plagues the most compelling issue during Primer's finale, as Abe and Aaron deal with duplicate versions of themselves created in alternate timelines. Not only is it impossible to tell who of Abe and Aaron are involved in these scenes, but which versions, and often also what they are doing. Strangely, with everything else going on, the third act of Primer seems mostly focused on Aaron preventing the occurrence of an event of inexplicable significance, wrapping up the movie in atmosphere of tepid anti-climax and missed opportunities.

Unquestionably, Primer is a pleasingly ambitious indie movie and a relatively impressive accomplishment, and its attempt to approach the well-worn concept of time-travel with seriousness and a lack of additional gimmickry is intriguing, but that approach is largely where its novelty and quality end. I suspect that with a bigger budget — including special time and attention paid to further expressing its ideas through production design and performances — as well as 20 minutes lopped off of the beginning and 30 minutes added to the last half, Primer might have been highly impactful even to a sci-fi-agnostic like myself. Instead, it's a movie that requires the aid of fan-made charts to even begin understanding it, and that understanding ends where it begins, with a poorly constructed movie in which poor actors play undeveloped characters of little interest. 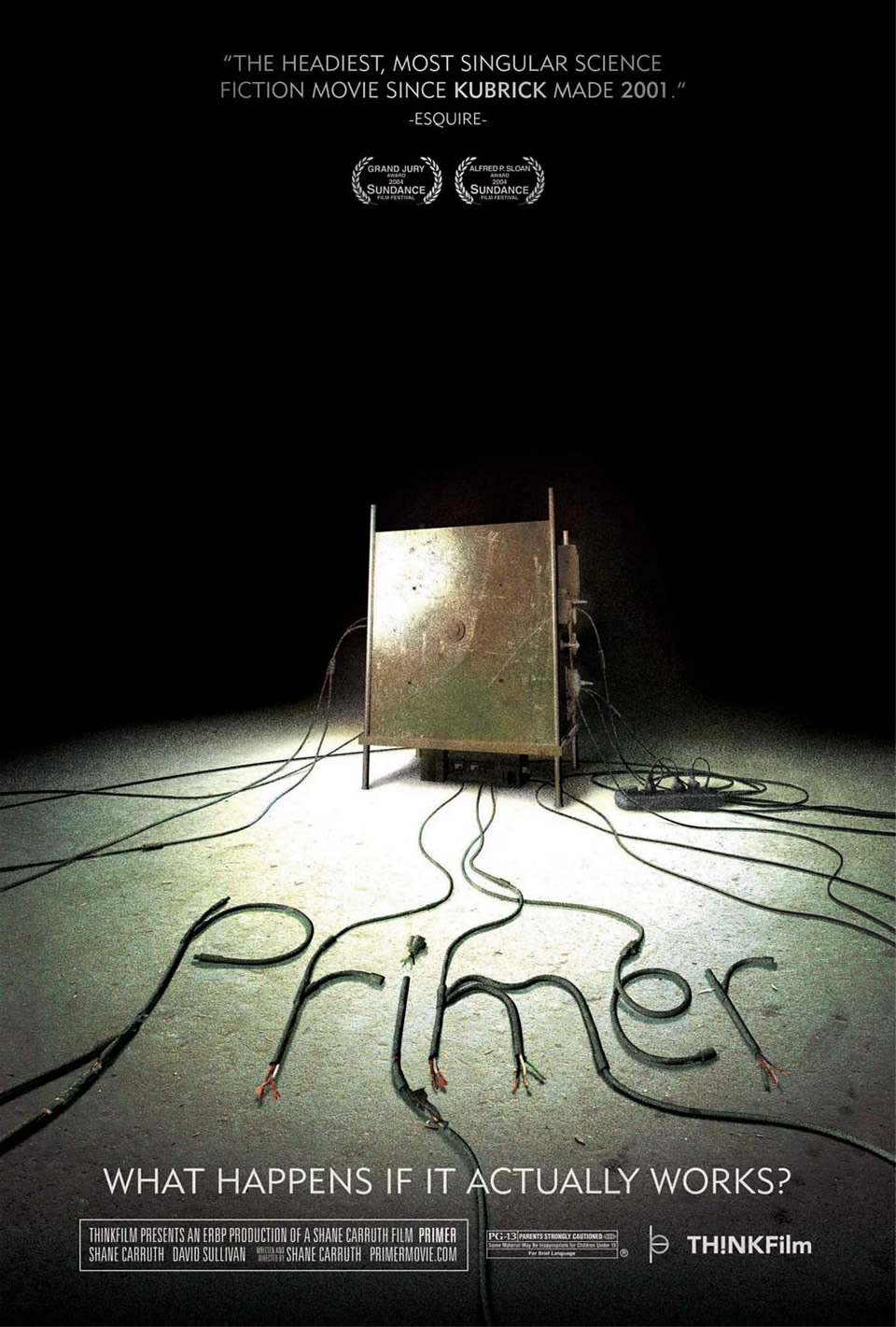