When I committed to traversing this gloomy 9-hour series about the tragedies of war, I had the utmost confidence that Masaki Kobayashi would be the most reliable of guides. Even though I've only seen a couple of his movies, and both within the last 18 months, the careful attention to narrative that he displayed in both Harakiri and Kaidan promised to reap dividends across the span of his most ambitious epic. Add my favorite Japanese actor, Tatsuya Nakadai, in the lead role, and the prospect of a marathon of gut-wrenching sadness became almost exciting. The first part of Kobayashi's three-part series, The Human Condition I: No Greater Love (1959), at least, satisfied my almost impossibly high expectations. The other two parts, however, were a mess that said less about war than they did about the grueling waste of an overreaching scope without the ideas to fill it.

Adapted from a six-part novel series by Junpei Gomikawa, The Human Condition pits the human spirit against the horrors of war, and the human spirit takes one hell of a licking. The Human Condition begins with Kaji (Nakadai) as a bright, young labor analyst, but the only promise the future seems to hold is his impending conscription by the Japanese army as World War II intensifies. Miraculously, his employer obtains a draft exemption so that Kaji can implement his progressive labor ideas hands-on as manager of a remote Manchurian mine, where a much-needed increase in productivity would be valuable to the war effort. With renewed hope for a future that seems to have averted looming disaster, Kaji finally marries his long-suffering girlfriend Michiko (Michiyo Aratama), and they move to their new home with tremendous excitement and no idea of the grueling trials that lie ahead.

The Human Condition I: No Greater Love is a marvel of screenwriting technique, with Kobayashi and co-writer Zenzo Matsuyama fashioning a practically thrilling cascade of irreconcilable conflicts that threaten to isolate and then crush every idealistic notion right out of the movie's hero. Kaji is constantly at odds with his corrupt underlings, unyielding military supervisors, and even the mistrustful oppressed laborers whom he yearns to help. Even more potently taxing, Kaji is in an almost constant state of conflict with himself, never confident that his clear-cut sense of ethics will not compound his problems, straining under the weight of his sensitive conscience, and even alienating Michiko by trying to shield her from his exponentially blooming distress. The masterfully written script is matched at every moment by both Nakadai's heartfelt performance and cinematographer Yoshio Miyajima's stunning black-and-white ultrascope canvasses, which are constantly isolating Kaji's forlorn figure against expansively barren landscapes. For a movie that runs nearly three-and-a-half hours, it is never dull and often substantially gripping. It's real marvel of craft that practically vibrates with a deep current of humanism commensurate with its unerring artistry.

The near-perfection of The Human Condition I may have raised my expectations too high. Even though The Human Condition II: Road to Eternity has the same masterful Miyajima photography, and Nakadai gamely continues to give Kaji his all, the narrative stutters for two hours before completely falling apart. Having learned nothing valuable from his ordeal at the mine, Kaji re-fights the same battles all over again versus an even stronger opponent: the Japanese Army. As a result, most of the second film is a frustrating and overlong rehash of the first, and somehow leads to a preposterous development in which the low-ranking Kaji is allowed to train a platoon according to his self-devised gentler methods. This turn also begins a disheartening trend in the series, in which extended and seemingly crucial sequences of these final two very long movies are rendered completely irrelevant by split-second deus ex machina. If this was intended to suggest that war is cruelly indifferent to the whims of individuals, it's both mishandled and hugely alienating. Without even a moment given to process and ponder the impact of these curt narrative jerk-arounds, it seems more like Kobayashi (and/or author Gomikawa) was purposely (lazily) avoiding seeing the story's ideas through to resolution, as if the outcome may have been too difficult to face. This is especially shameful because of how unflinching the first part was in following its devilish labyrinth of compromises to a perfectly organic end.

All throughout The Human Condition II there is also a steep decline in Kobayashi's attention to staging, resulting in several utterly unconvincing fight scenes that lack even the gritty realism of Star Trek: the Original Series — except for the slaps; there may be more slaps-per-minute in The Human Condition II than in a Three Stooges feature, and many look painful — and culminating in a battle scene that is as spatially incoherent as it is logically implausible. For more than two hours, I could not wait for the redundant boot camp material to end and the fighting to begin, but the battlefield is loaded with mines that blow this trilogy to pieces. By the end, as Kaji is forced to flush all of his prized ethics down the toilet in exchange for survival, Kobayashi also sacrifices all remnants of narrative credibility to indulge in stripped-bare thematic hysteria, and what is supposed to play as great tragedy is so over-the-top-ludicrous and poorly executed it made me howl with laughter.

Sadly, The Human Condition III: A Soldier’s Prayer (1961), with the addition of co-writer Koichi Inagaki, continues the legacy of The Human Condition II's systemic failings, extending both the narrative pointlessness and thematic self-parody to excruciating lengths. As Kaji leads a rag-tag band of deserters across the harsh Manchurian wilderness, searching for "home," he ping-pongs erratically from ruthless survivalist to strident moralist, but, given the 200-minute running time you might expect some new ideas or intentions to show up in this final chapter of the saga. Nope. New characters are introduced just for the purpose of destroying them for sentimental effect and nothing that happens is new or of any import. The Human Condition III does feature one stand-out scene as Kaji's party discovers a refugee camp full of women who are eager to indulge any man capable of leading them to a better place, but as with everything else in the final six hours of this series, it raises questions and implications that are merely shrugged off when no longer convenient. For a series that started as a first-rate bummer, it ends in a complete shambles of disappointment.

Trailer for the Human Condition I: No Greater Love (1959)

The Human Condition I: No Greater Love (1959) Stills

Discuss The Human Condition I: No Greater Love @ Letterboxd 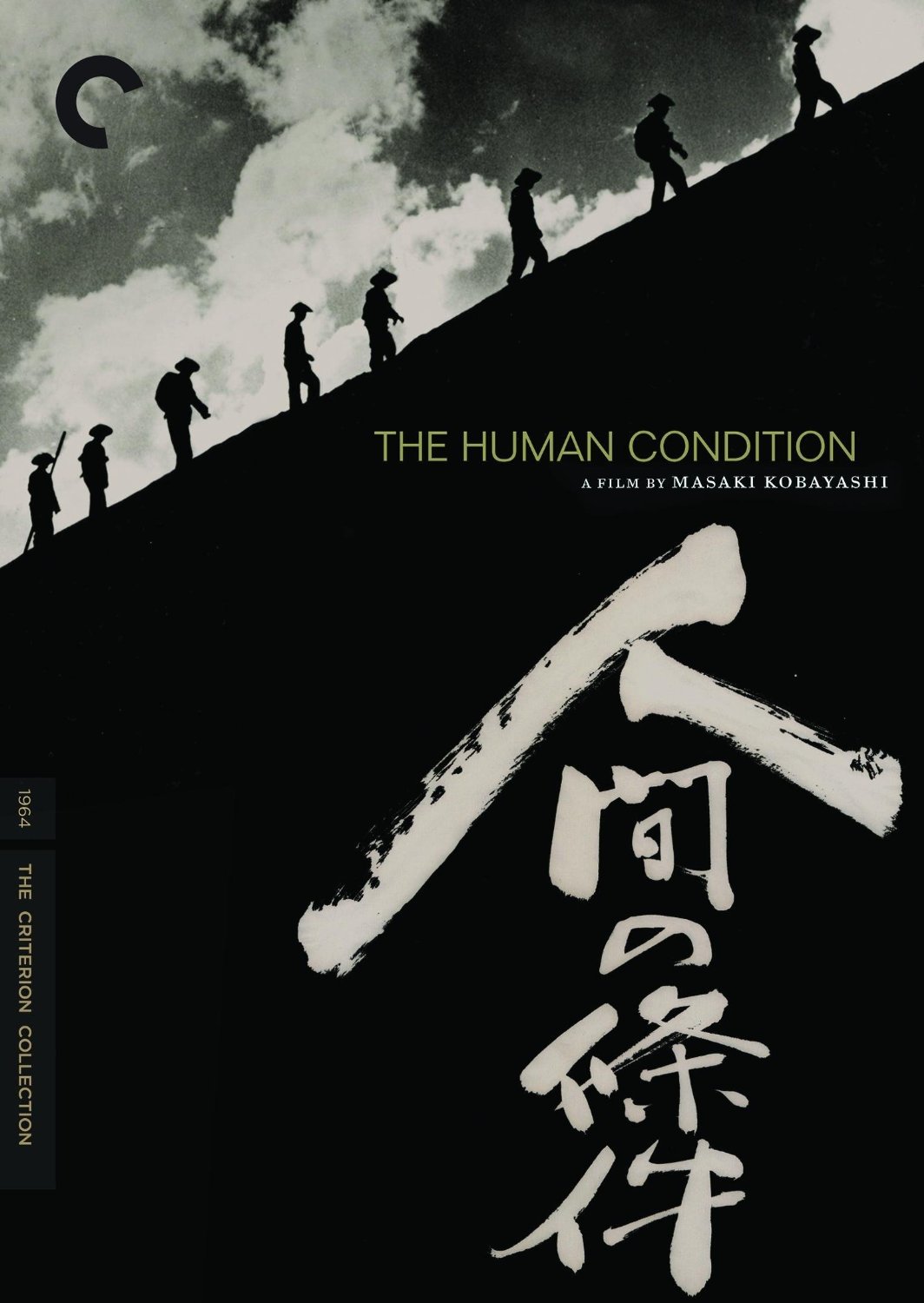