Unfortunately, there is only one James Cameron. If he were split in two, I would go see all the movies made by the bold technical adventurer who chronically challenges himself with impossibly mammoth sets and groundbreaking special effects, and ignore the movies made by the ham-handed frat boy whose characters speak in platitudes and lack the depth of 3-panel comic strips. Sadly, you can't get one Cameron without the other. Occasionally, he stumbles upon an idea that muffles his flaws — his knack for one-dimensional villains, for example, is not problematic in Aliens or The Terminator — but in most of his movies there is a constant mix of beautifully wrought heroic ambition and tragically bad writing made worse by one-note performances. The Abyss is emblematic of Cameron's duality, with his two parts tag-teaming in and out of the director's chair, swapping scenes of masterful scope and powerful emotion with cringe-worthy cliches, contrived sentimentality and the intellect of a precocious 5-year-old bully.

After a nuclear submarine is overcome under mysterious circumstances during a training exercise, the U.S. Navy commandeers an experimental oil drilling station as the base for a SEAL team to launch an underwater missile recovery operation. Rig foreman Bud (Ed Harris), his crew, and his ex-wife/station architect Lindsey (Mary Elizabeth Mastrantonio) reluctantly cooperate, but SEAL team leader Coffey (Michael Biehn) is a prickly asshat even before he succumbs to a deep pressure-induced mania, turning the tensions between the drillers and soldiers into material for a B-level TV movie. As this feud broils, a race of cute-but-genocidal aliens living at the bottom of the ocean plan to wipe out the human race with massive tidal waves.

Even though it takes place mostly in cramped dry quarters or isolating wet ones, The Abyss has the staggering scale we've come to expect from Cameron's movies over the past 30 years. With its many underwater scenes filmed in mammoth custom-built tanks, Cameron brilliantly captures the vast, mysterious, and claustrophobically empty depths of the sea. His visualization of the rig's dark corridors, the neat equipment used for exploration, and the fluorescent alien busybodies, are also near-perfect (there are a couple of terrible blue screens in The Abyss, and I suspect Cameron's desire to fix these is holding up this movie's HD remastering). Cameron knows how to plot out and shoot a tense scene as well as any of his contemporaries in the blockbuster market, and a couple of sequences that involve swimming with limited or no oxygen tanks are fantastic. He also gets two excellent performances from Harris and Mastrantonio, despite his attempts to sabotage them with underwhelming dialog and initially cardboard characterizations. Even though Lindsay arrives on the rig looking pale, hollowed out and pulled too tight — like Dracula's librarian — and everyone on board takes a turn calling her a bitch (Cameron has never been known for particularly affection depictions of women), that overused array of stereotypical attitudes gets dropped fairly quickly, and she and Harris develop an affecting relationship that demands quite a bit from the actors as they are dragged through extremely grueling, tense and heart-rending situations that dwarf both their petty squabbles and Cameron's tendency to drive every point a little too far.

At nearly 3 hours long, where this "director's cut" version of The Abyss goes astray for me is its first two-hours of focus on a typical series of cascading technical problems that threaten to condemn the crew to the bottom of the sea, aided and abetted by a literally eye-rolling and teeth-grinding villain. Although the visually appealing aliens pop in and out a few times, the first two acts are so obsessed with macho posturing that the discovery of extraterrestrial life is forgotten for long stretches as guns are pointed, brows drip with sweat, and Harris and Biehn punch attack each other with both fists and machines. the final hour, which focuses more on the aliens and the roller-coaster reunion of the exes, is by far the best stretch in The Abyss; but Cameron's banal twin is always lurking around the corner, ready to wrest the helm just when things seem to be going great, and the very end of The Abyss is a shocking dud. Not only does Cameron deliver his thudding moral with the literate grace of an elementary school anti-drug assembly, his clumsily conceived polemic actually undermines the initially wondrous nature of his water-dwelling visitors. Are these magical creatures a greater, wiser life form, or are they fickle monsters with an irresistible sweet tooth for melodramatic stories of love and redemption? Do they only understand earth from what they see on TV? Are they unaware of all the other acts of love and bravery that occur every day around the world? Does revealing their plan solely to an oil rig foreman solve anything? Will they change their minds and destroy the earth the next time something bad is shown on the nightly news? Doesn't the existence of a powerful alien race who controls the oceans argue in favor of humanity developing some kind of weaponry with which to defend itself, or does Cameron morally support the slavery of mankind at the whim of stupidly capricious masters? Why don't these aliens do something good with their power, like lower the rising sea levels, instead of plotting out a genocide? I doubt Cameron took a moment to consider any of these issues. He's not what I consider a thoughtful artist, but the parts in The Abyss that work well are so good they make me pine for a filmmaker that matches his vision with commensurate intelligence.

The Abyss was my top unseen movie on the Flickcharts of several users. Flickchart founder Zampa ranks it as his 9th favorite movie of all-time, and it was his and Blott's respectable compatibility scores of 728 and 806, respectively, that qualified it for November's list. It was also high on the lists of Yojimbo28 and goat6boy, who scored just outside the qualification range. The Abyss was a dual point of thematic convergence during November, as it was the second of two movies to feature violent confrontations between Harris and Biehn (see The Rock) and the first of two long movies to take place mostly underwater (see Das Boot). 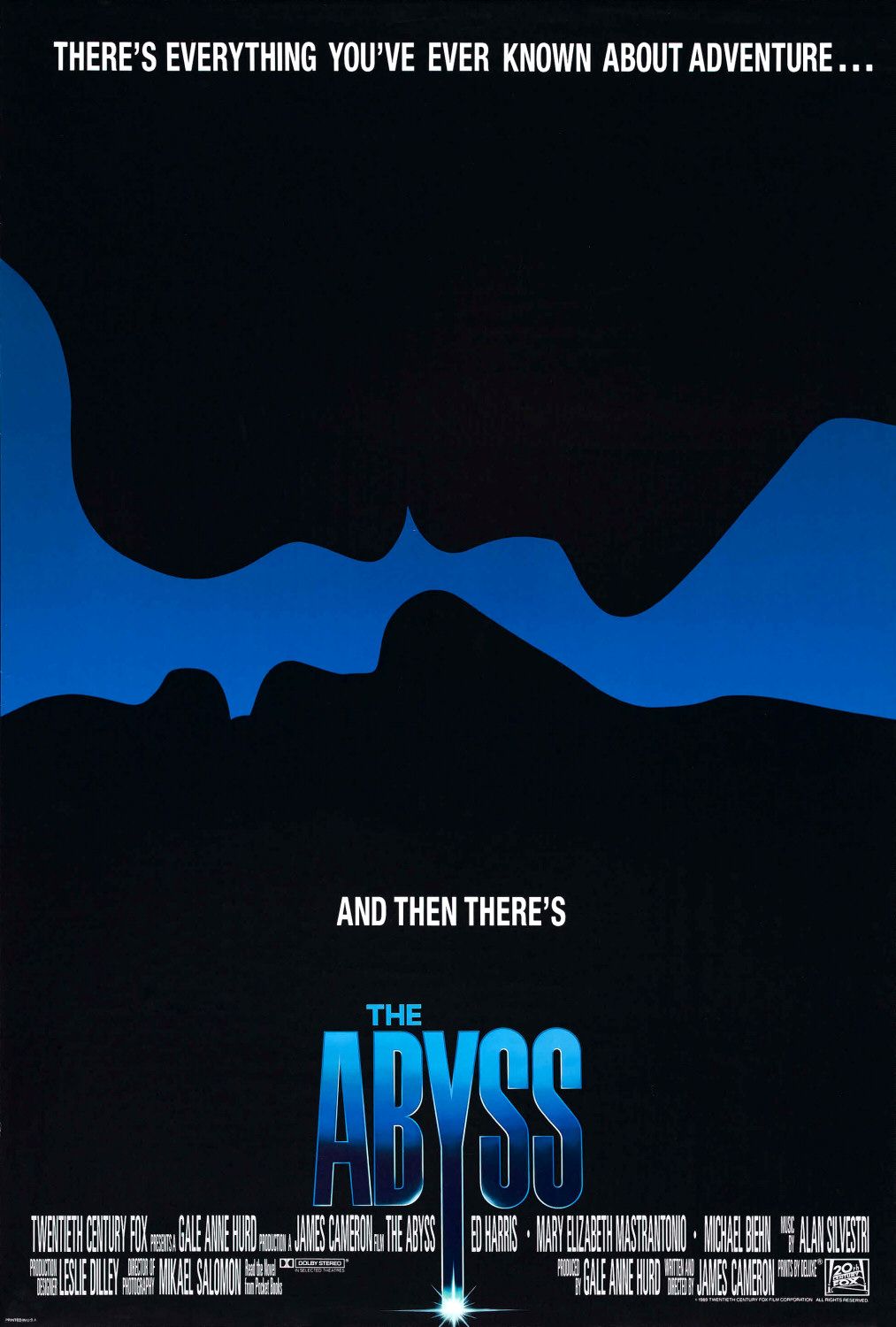