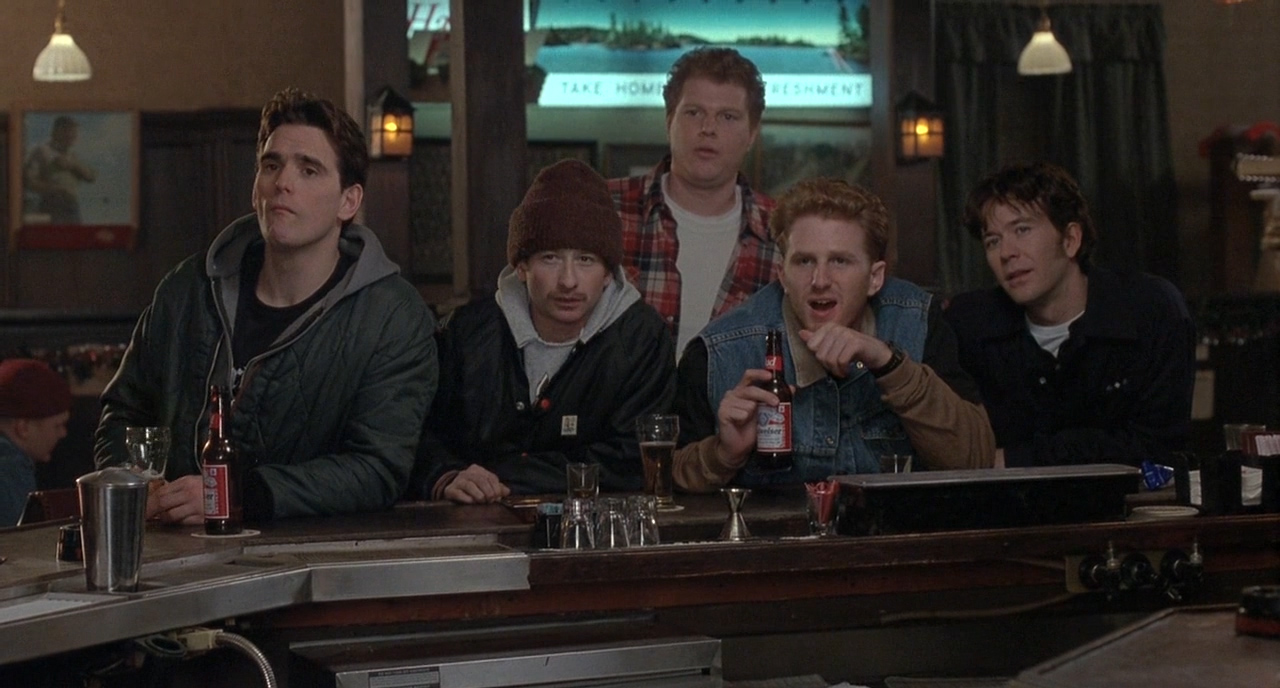 The indie boom of the 1990s wasn't completely comprised of retro-ish crime thrillers and edgy slacker-themed comedies, even though it felt that way sometimes. It also struck a rich vein of thoughtful, low-budget, intimate relationship dramedies from new perspectives. As with any genre, these ranged from the profound to the shallow, with emerging talents like Richard Linklater, Noah Baumbach, Whit Stillman and Doug Liman at the forefront, and some more dubious efforts scraping the bottom. On the pleasing cusp of the middle-of-the-pack is Beautiful Girls. I suspect that director Ted Demme and writer Scott Rosenberg thought the movie they were making was smarter and more insightful than it actually is, but it's still an agreeable step-up from the indie-spirited but low-yield romantic comedies of Ed Burns.

A piano player (Timothy Hutton) frustrated with his career in New York City, and unsure about his engagement to a sensible woman, returns to his hometown for his high school reunion, where a couple of his old friends — Michael Rappaport and Matt Dillon — are still having trouble letting go of their juvenile fantasies, particularly with regard to relationships. With a mostly light touch, Beautiful Girls postures itself as a revealing challenge to the unrealistic expectations many men harbor about female beauty and sexuality, but is at its least effective when it most directly broaches that subject.

Rosenberg's script does a decent job of depicting a comically heightened version of a working class town populated by simple and thickheaded, but also sort of sweet, dudes struggling to figure out how to deal with the women in their lives, but it's the cast that really makes Beautiful Girls work during its best moments. Hutton is a solid and appealing lead, and Rappaport and Dillon provide complementary dynamics, one excitable and the other cool to a fault. Noah Emmerich is also very good as the only married father in the group, subtly handling one of the film's more powerful scenes. the rapport between these guys (with Max Perlich and Pruitt Taylor Vince on the periphery) is natural and convincing and sets a solid foundation for the relationship dramas which they carelessly create for themselves.

The female cast in Beautiful Girls is just as good, if not better, despite their less-developed roles. Martha Plimpton is suitably exasperated but underused as the receiving end of most of Rappaport's nonsense, but it's Dillon's women who steal the movie with two touching performances: Lauren Holly as his unhappily married high school sweetheart who want to rekindles their teen romance, and Mira Sorvino as his patient, sweet and wounded girlfriend. Holly plays an icy type but ultimately reveals a deep sadness, and Sorvino, in particular, is wonderful, stealing each of her brief scenes with her quiet persistence. Rosie O'Donnell appears in a few attention-grabbing scenes for sole purpose of delivering long, snappy missives about the failings of men. Her scenes are lively and provide some laughs, but in a movie ostensibly arguing for men to adopt a more well-rounded view of women, it's a bit odd that such a distinct (and different-looking) character is relegated to brassy comic relief with no story of her own, when her material might have been even more effective coming from Plimpton's character. Also, the polemic nature of O'Donnell's scenes suggest that Rosenberg lacked confidence in his storytelling. He also, briefly, imposes his "author's voice" on Rappaport, who launches into an improbably eloquent explanation of his own psyche; the sudden shift in voice is awkward and too direct, and all of the scenes written like this thud within the larger context of the movie.

There are three other significant female characters in Beautiful Girls and they're each problematic in different ways. As Hutton mulls his future with his fiancee, he encounters two vastly different idealized female types, played by Uma Thurman and Natalie Portman. Thurman, a model who can hang like one of the guys, represents the unattainable idea of the perfect woman; Portman plays a precocious 13-year-old neighbor who flirts with Hutton and represents the unexplored potential of youth and the vague possibilities of not committing. As Thurman shuffles platonically from guy to guy, she teases each but submits to none; using this archetype as a device, Rosenberg is necessarily guilty of indulging in the very male fantasy his movie declares as false. This wouldn't be a problem if Thurman's character was presented as realistic, but her motivations are inscrutable and she seems to solely exist as an enigmatic siren/sage who vanishes the moment she ceases to be of use to the men in the movie. Even though Portman gives an affecting performance that cemented her potential as a major emerging star, she is saddled with some of the most awful "precocious kid" dialog ever heard, but the rapt attention that she commands from Hutton is even worse. Even a slight adjustment to the dynamic between them might have felt more natural, like if he hadn't noticed her at first, or the intensity of his projections onto her had been more gradual. Either way, if Beautiful Girls had pulled the annoying twist of revealing that neither Thurman nor Portman really existed outside of Hutton's mind it may have made more sense — however more disturbing — than presenting them as "real." the final supposedly important female character in the movie is Hutton's fiancee, as played by Annabeth Gish, but she is relegated to a background player, even when she's brought to the foreground. Instead of presenting this "normal" woman as a worthy option due to her own qualities, Rosenberg makes her a disappointing blank slate. Just like Hutton and the other men in the movie, all of the screenwriter's attention is paid to the colorful fantasies, minimizing the more realistic female characters as boring, safe fall-back options who wait around for men to give up.

All that said, Beautiful Girls ends on an agreeably bittersweet note, and hits enough amusing, poignant notes along the way that its somewhat bungled messaging doesn't stop it from leaving a pleasant aftertaste.

The Top 20 of Flickchart user csschneider, which includes Beautiful Girls at #6, includes 11 movies from my own Top 100 plus a few others that I rate very highly, which earned him a relatively high compatibility score among this month's group. Beautiful Girls falls squarely in the middle of my chart, dropping him 51 points to 686, but still within the top half. 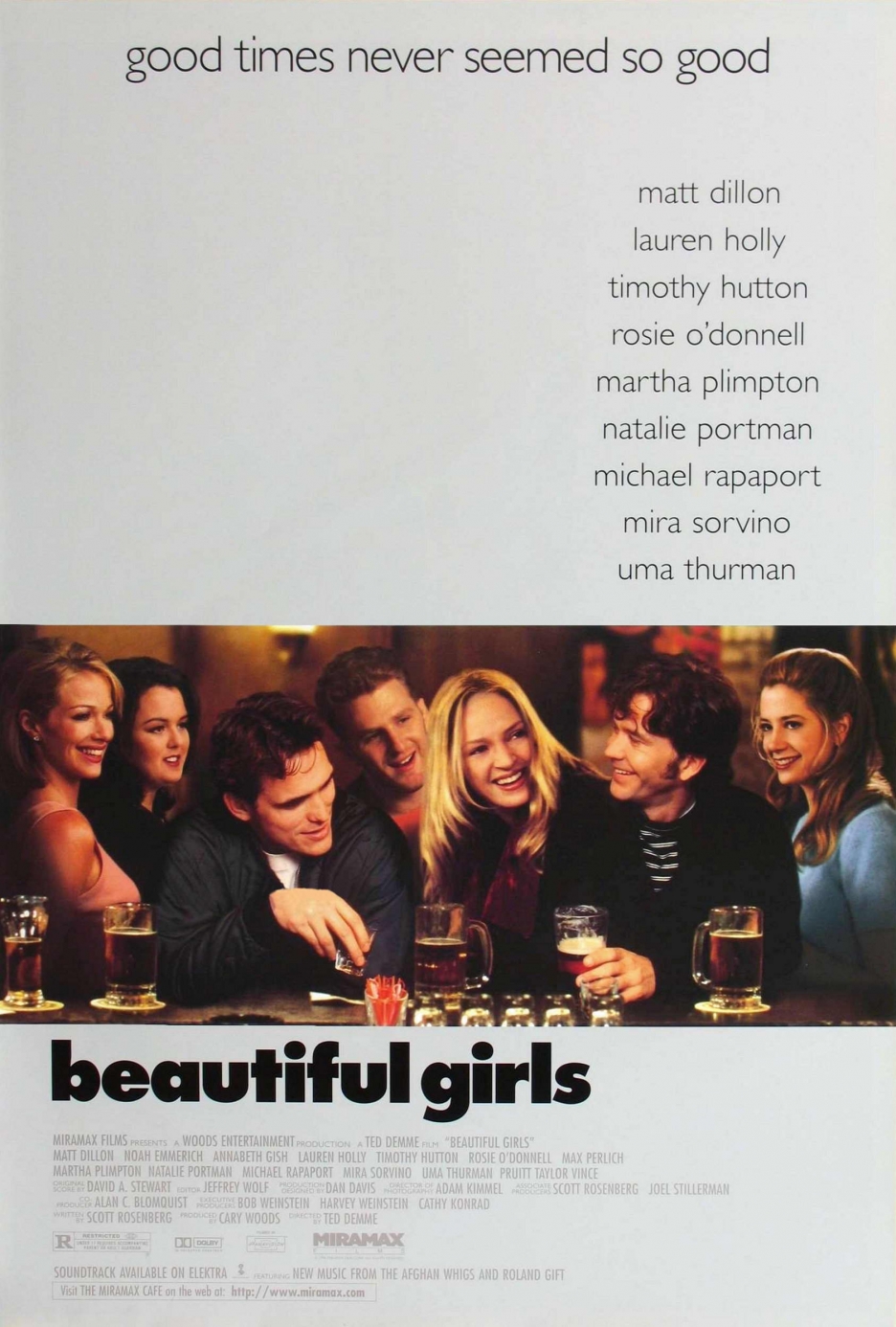