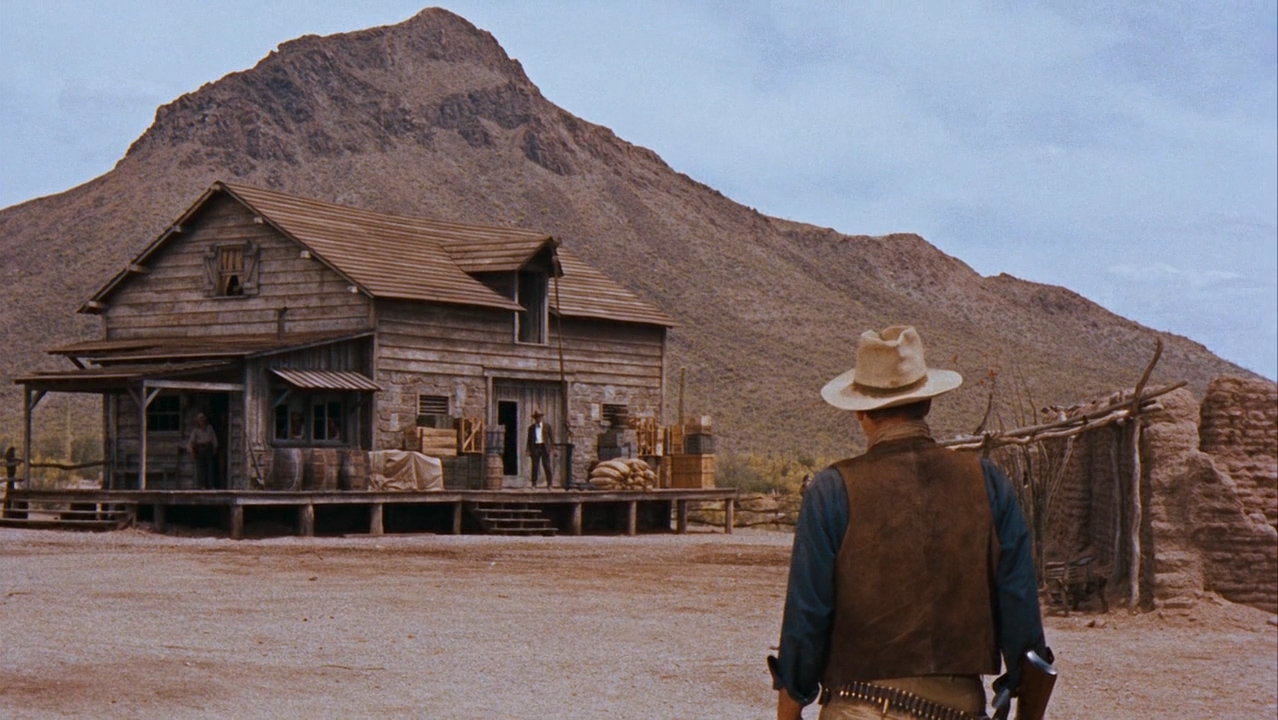 If PopGap sometimes seems like little more than a venue for me to complain about genres I don't usually seek out — old screwball comedies, war movies, film noir — that's only because I've intentionally skipped many classics out of sheer disinterest, and they're finally coming home to roost on these monthly lists. While I don't feel like I have a particular aversion to westerns, I certainly prefer revisionist westerns from the mid-1960s and later, and have rarely been impressed with the iconic stardom of John Wayne. Still, I love both The Searchers and The Man Who Shot Liberty Valance, so I haven't exactly closed the door on Wayne or the other traditional westerns from his era. I just keep the door slightly ajar and don't peek through very often. Rio Bravo is one of Wayne's most popular movies — it's ranked 3rd among all his movies over at Flickchart, behind the two I've already cited and ahead of his famous breakthrough Stagecoach — but it didn't do much for me.

Wayne stars as a small town sheriff hoping to stave off an impending onslaught by bandits for a few days until U.S. marshals arrive to pick up a high value prisoner. He doesn't have much in the way of help: just Stumpy (Walter Brennan) — a fussy old prison guard — and his congenitally drunk deputy (the congenitally drunk Dean Martin). For no particular reason, there's also a young woman in town (Angie Dickinson) who takes a fancy to the grump old Sheriff. Even though the sheriff tells everyone, stubbornly, he doesn't want any help, he does allow a confident young gunslinger (Ricky Nelson) to pitch-in. And then they wait.

At nearly two-and-a-half hours, Rio Bravo is agreeable but at least 45 minutes too long. Although the premise of the film is that an attack is imminent, it sure doesn't feel that way; instead the characters take baths, eat, flirt, mope, sit around, and engage in annoying stretches of tired "cute" dialog that neither moves the story forward nor adds interesting dimensions to the people. Wayne is a solid presence, but the dialog-heavy script is not to his advantage and watching hot young Angie Dickinson aggressively court him is gross, awkward and bizarre (every time she calls him "John T." it sounds like she's calling him "Jaunty," which isn't a word anyone has ever used to describe Wayne). Dean Martin is appealing but he gives a barely bothered performance that stays in first gear even though his character has the most challenging dramatic arc. Ricky Nelson (who was my first favorite singer when I was five years old) is a blank slate as Colorado, providing little more than stunt-casting aimed at getting teenage girls to buy tickets. Nelson and Martin share a completely gratuitous singalong that reeks of the marketing department taking a stab at screenwriting. the only truly great thing about Rio Bravo is Brennan's irascible "old coot" performance; every time he speaks the movie spring momentarily to life before slipping back into the giant nothingness of its un-escalating storyline.

Visually, Rio Bravo doesn't even try. It's serviceable, as if Hawks was shooting a big budget episode of Gunsmoke. I found the entire movie uninspired from start to finish.

The only thing I really knew about Rio Bravo before watching it was that John Carpenter had used it as inspiration for the action-heavy Assault on Precinct 13, so maybe my expectations were misgauged, but instead it plays like the "Waiting for Godot" of westerns, only with subpar Howard Hawks dialog replacing Beckett's fun riddles. I've since learned that Wayne and Hawks intended Rio Bravo as an "answer" to High Noon, which is one of the dumbest things I've ever heard and makes me like it even less. Although, I suppose if they wanted to present a counter-argument to a superb, purposeful, tense classic that runs a lean 85 minutes, they succeeded at every point by making a bloated, aimless, sloppy showcase for movie stars to sit around for 142 minutes with very little to do. 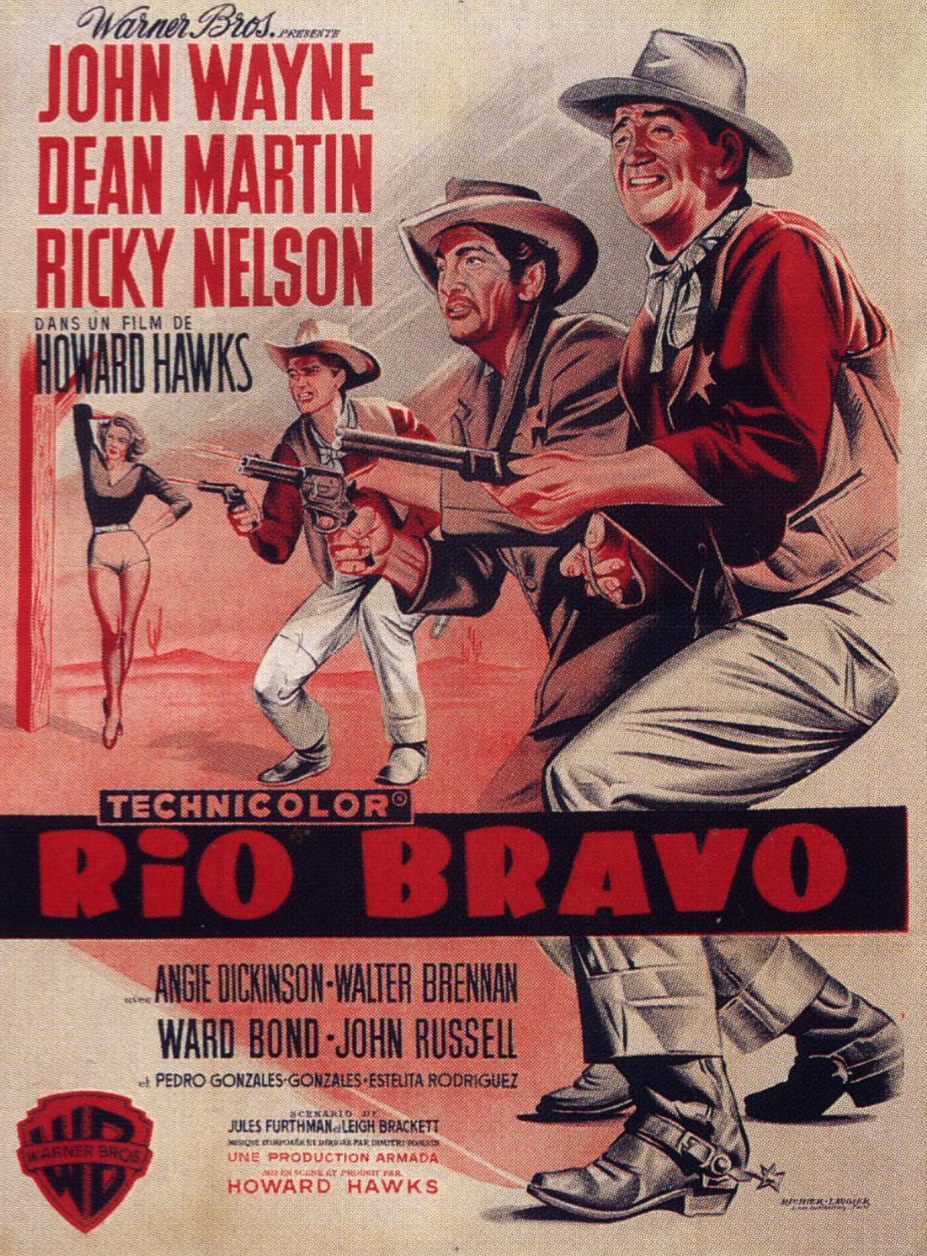