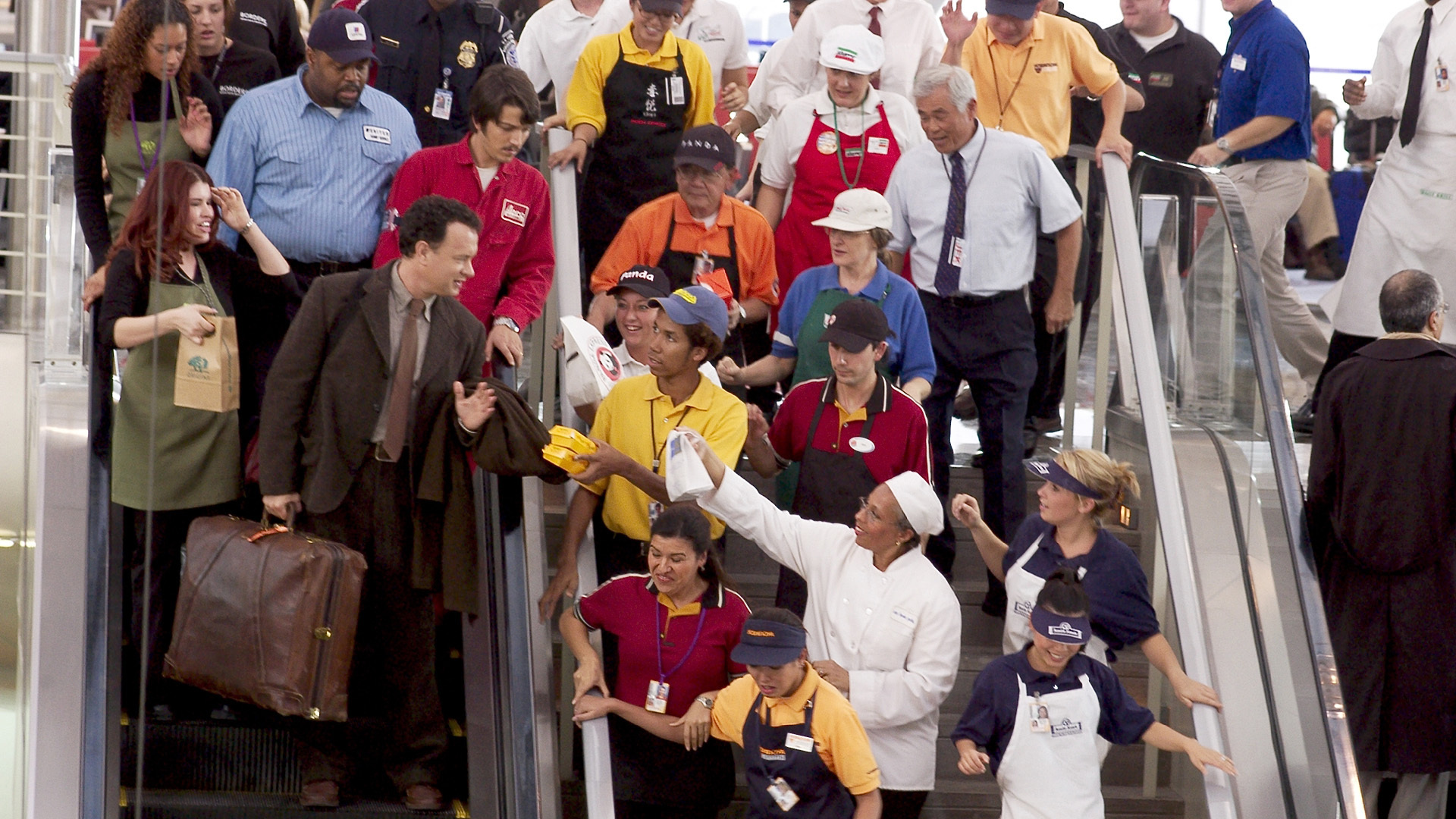 Mehran Karimi Nasseri was an Iranian refugee who lived in a Paris airport for 18 years after losing his papers en route from Belgium to London. European bureaucracy, mixed with Nasseri's likely mental illness, conspired to make him a "stateless person." This is a fascinating story, and Dreamworks paid Nasseri $250,000 for the rights to make it into a movie, and turned it into this unrecognizable mess. Three years after The Terminal was released, Nasseri was living in a homeless shelter in Paris.

Tom Hanks stars as Victor Navorski, a tourist whose fictional homeland, Krakozhia, exploded into a civil war while he was fliying to New York City. With the Krakozhian government immediately dissolved, Navosrki is not granted a visa to enter New York City, but he also can't be deported, because there is nowhere to send him. So he lives in the departure lounge for 10 months.

Even this complete bastardization of Nasseri's true story is a potentially interesting concept, but director Steven Spielberg and screenwriters Sacha Gervasi, Jeff Nathanson and Andrew Niccol bury it under several layers of implausibility, contrivance, and stale Hollywood cheese. There's a villainous airport manager played by Stanley Tucci; there's a daffy flight attendant (Catherine Zeta-Jones) who flirts with Victor; there's a rag-tag security, maintenance and operations crew who are lovably wacky, supporting Victor in his pursuits like cartoon mice to his Cinderella. Navorski also turns out to be some kind of saintly genius savant so there can be heroic moments with glowing cinematogarphy and swelling music. How did those things end up in this movie?

I liked parts of The Terminal. It's well-made, and well-acted, like all movies from these heavyweights. But it's painfully contorted to fit a conventional Hollywood mold — complete with intermittent inexplicable Paul Blart-level slapstick, like a change machine projectile-launching quarters into Hanks' face — that it loses both its verisimilitude and its relevance. From the opening scene, in which Tucci makes no effort to effectively communicate with a man who he knows speaks no English, The Terminal threw credulity out the window. Supposedly Victor is from a country so small, that the biggest airport in the U.S. can't find a translator. Yet, there are direct flights from the airport to Krakozhia. Yet, apparently there is no one on any of those flights that can help out. Yet, Hanks is able to find travel guides in his language in the airport store. the basic premise of The Terminal makes no sense, and everything that flows from there is a nonsense mish-mash of boilerplate sentimentality and dumb slapstick.

If The Terminal had been made in the cinema verite style of Zhang Yimou's wonderful bureaucratic drama The Story of Qiu Ju — or Todd McCarthy's terrific recent immigration drama The Visitor — and realistically depicted a man lost inside a bureaucracy, or made any attempt to faithfully depict the weird real-life story of Mehran Karimi Nasseri, they could have actually produced something truthful, special and meaningful, instead of something utterly false that wants desperately to be special and has soaring music to tell you that it's meaningful. 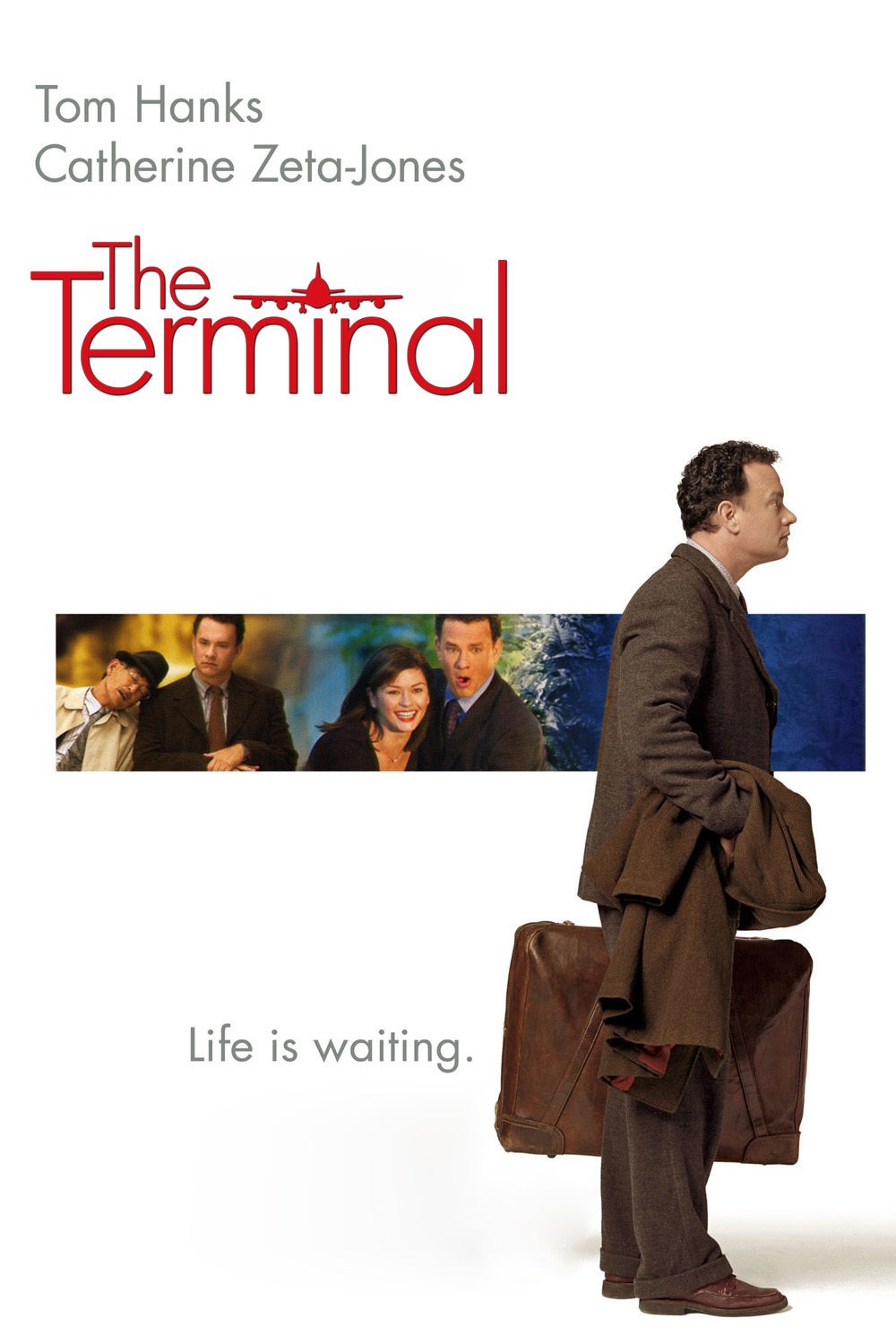