Decent but overlong big budget Disney fantasy/adventure from back in the days when spatial continuity was never a concern.

Jules Verne's famous story about the crazy proto-Bond-villain Captain Nemo and his fantastical luxury Civil War-era submarine has an intriguing set-up and a fine ending, but gets too whimsical in the middle with low-lights like a wackily whooping cannibal tribe and Kirk Douglas singing a duet with a seal.

Aimless at times, 20,000 Leagues Under the Sea needed a more constant and escalating sense of menace. the giant squid was pretty cool. Not H.G. Wells-cool, but not bad either. This is the biggest of nearly 10 adaptations to-date, but a new version is also in development.

Since I'm sick and too blase about this movie to write anything else, here's my Twitter stream while watching it: 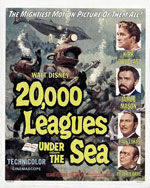