I don't think of myself as big Tobe Hooper fan, but when I look at my all-time favorite horror movies, he has four credits up near the very top, which no other director can boast. John Carpenter, David Cronenberg, Stuart Gordon and Sam Raimi each have two in that company, but most of my other favorites were made by directors who briefly dipped a toe in the horror genre, or hit one homerun in a career of base hits. Although Hooper's directorial credit for Poltergeist has been questioned, that would still leave him with three major successes: Texas Chainsaw Massacre, The Funhouse, and Texas Chainsaw Massacre Part 2. I've seen very little from the rest of his fairly obscure career (and have forgotten most of what I have), but upon watching The Funhouse for the second time late Halloween night, and marvelling at what Hooper was able do with fairly standard material, I feel like I should really give his entire career a closer inspection.

The Funhouse sounds like ordinary slasher fare — a group of randy teens (Elizabeth Berridge, Cooper Huckabee, Largo Woodruff, Miles Chapin) decides to camp out all night inside the spooky dark ride of a travelling carnival, but run afoul of a mutant carny — and even seems at first like another blatant early '80s rip-off of Carpenter's Halloween, mashing up the opening scene of that influential 1978 hit with an iconic sequence from Alfred Hitchcock's Psycho. What follows, however, is pure Hooper: a slow descent into madness colored with all manner of scurvy behaviors and seemingly slight but unsettlingly tense interactions, and decorated with the innately sinister trappings of carnival life.

Hooper's great talent, at least during this early period of his career, was to confront horror un-sensationally: all of his characters behave and interact believably (though not always rationally, likably or tenderly) and he never belabors their terror with cinematic histrionics. He takes the ordinary and pushes it through an emotional meat grinder. Even without the killer carnies, the carnival in The Funhouse is crawling with scum and danger, from erratic hobos to sideshow entertainers who give unsavory attention to children. These little details don't need to connect with plot points to be effective at creating a subtle swarm of ickiness that scurries just alongside the border of normalcy, waiting to engulf anyone who takes one step too far off the beaten path.

There are traces of both of Hooper's great Chainsaw movies in The Funhouse — with their questionable father-son dynamics, final notes of dubious escape from a world gone mad, and the mostly non-explicit violence of the original — but some of Hooper's best work in The Funhouse is unique to its setting, with great attention paid to the design of the amusement park and its attractions. If I were a weird billionaire or just a lonely obsessed nerd, I could see myself entertaining the notion of having this exact funhouse ride rebuilt in my backyard. Hooper perfectly evokes the cruddy, low-rent fascinations of real-life carnivals, tapping into what must be a deep personal love of that world, but as well a keen feeling for the darkness that sticks to every surface like impermeable grime.

Kevin Conway — who was also in David Lynch's The Elephant Man the previous year, which is sort of a flipside to The Funhouse — co-stars in three roles alongside Sylvia Miles. Dean Koontz wrote a novelization from the screenplay. 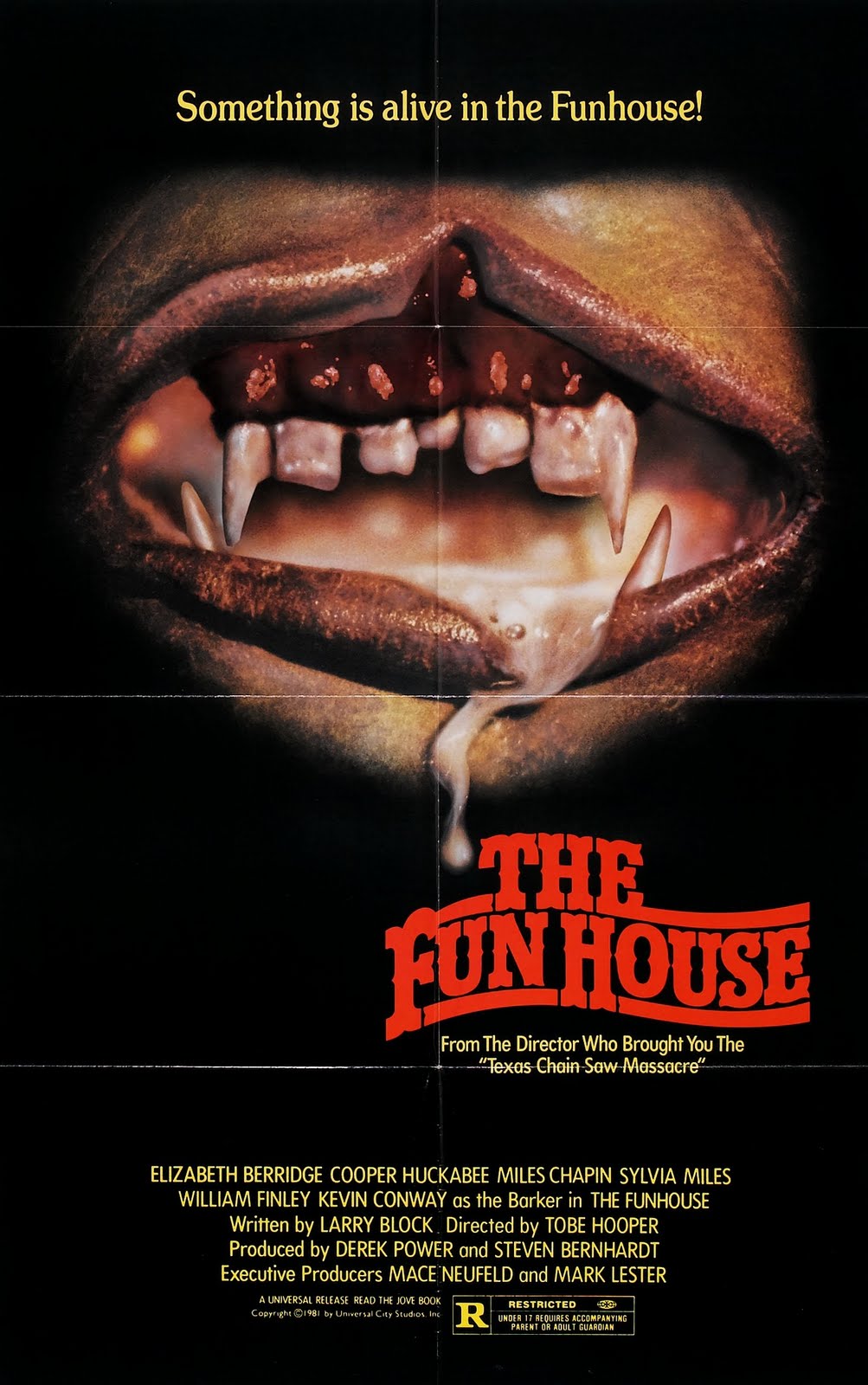 Octoblur: If the quality doesn't scare you the quantity will.
More about The Funhouse (1981) on Videopolis