I'm not a big fan of the James Wan/Blumhouse horror factory or its imitators, which, together, are saturating the theatrical horror market with dull and cynical products. However, Annabelle piqued my interest for a couple of reasons. First of all, I liked The Conjuring quite a bit; even though it was deeply derivative of better movies, it trusted heavily in its strong cast of empathetic actors, showing a lot of restraint in its overall style and making its scary moments more effective than expected. Second, I became aware last Octoblur of the almost fetishistic importance of "creepy dolls" to the horror genre, as they kept popping up throughout the month. While Annabelle delivers on the second count, it didn't really satisfy me on either.

Inspired by the "true story" of an allegedly demonically possessed doll currently on display at the occult museum of celebrity paranormal investigator Lorraine Warren, Annabelle invents an origin story that involves an expectant mother, a demonic cult, several paint-by-numbers characters and plot points, and a complete absence of cleverness or genuine artistry. For the first half, I thought Annabelle — which Wan produced as a prequel to the opening sequence of The Conjuring — showed some promise with a fairly natural approach and a fine lead performance by Annabelle Wallis in whom I invested early and easily, but the warning signs were there, and it all falls apart with a flat and stale escalation and an ending that utterly lacks the emotional punch it seemed to think was a given.

The problems with Annabelle are many, but the titular doll encapsulates most of them. I hate the design of the doll, which is so ostentatiously market-tested "creepy," it appears to have been manufactured for the express purpose of demonic possession. While there are obvious trademark issues that may have prevented director John R. Leonetti from using a Raggedy Ann doll like the real Annabelle, any innocent-looking doll could have been effectively transformed into an object of terror with the right content and approach. Leonetti shows a total lack of faith in both his ability and material to start with such an obviously sinister prop. Likewise, while he shows some facility with jump scares, Leonetti can't resist overplaying the tropey effects-aspects of his "scarier" moments rather than mining potentially deeper and more resonant creepiness. As the film proceeds, the surface of the doll becomes more and more scarred and distorted — like Reagan in The Exorcist — but with each new level of degradation, so the rest of the surface-obsessed movie becomes likewise stupider and more dull. There's never any rhyme or reason to the demon's manifestations or end-game, and the doll is ultimately little more than an incidental prop that relies solely on its ghastly visage for effect. There's absolutely no substance behind Annabelle, consigning a legendary "true story" to one in a stack of listless and samey attempts to cash-in on the same old horror ideas.

I should have looked up director Leonetti prior to watching Annabelle. While his work as a cinematographer has had a few high points (The Conjuring & Insidious), it's mostly been garbage — although his first DP credit is for the fitting Child's Play 3 — his few outings as a director have been dire and I had no business expecting anything different here. 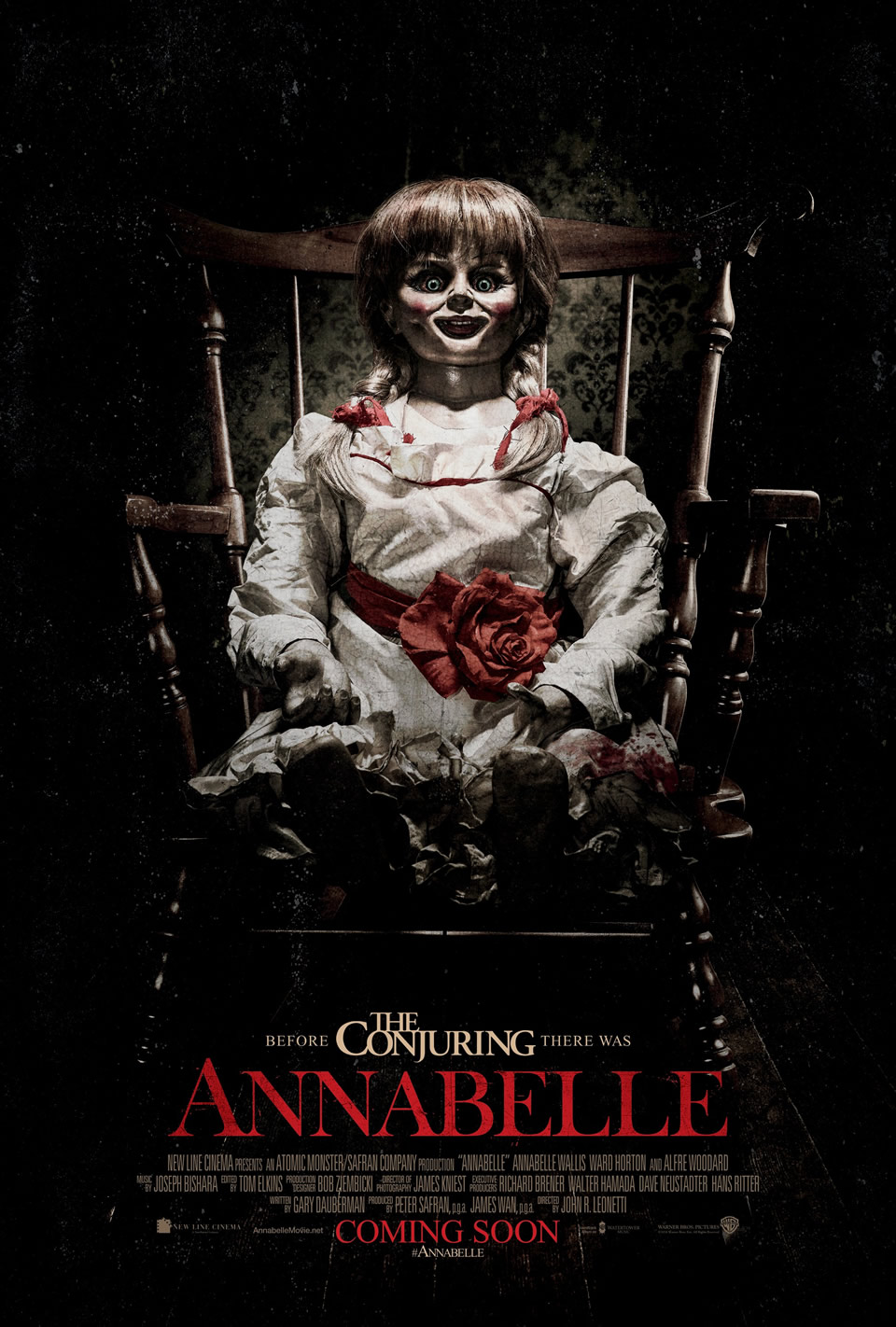 Octoblur: If the quality doesn't scare you the quantity will.
More about Annabelle (2014) on Videopolis